Perseverance and Motivation: Why nothing can keep Calhoun off the court 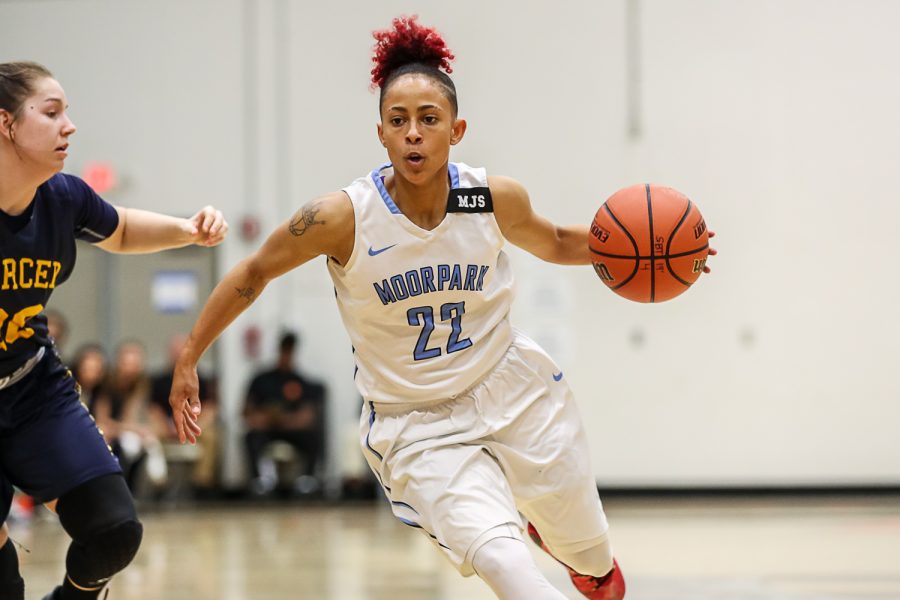 When Breanna Calhoun tore her anterior cruciate ligament in her left knee, she thought she would never be able to play basketball again.

“I was just crying [and] crying, it was just so emotional,” Calhoun said.

Playing professional basketball seemed impossible now. A dream she had been chasing her whole life was taken away from her in an instant.

But Calhoun knew how to remold heartache into her own personal motivation.

Calhoun endured a fatherless childhood, she lost her beloved 14-year-old cousin to suicide, her knee injury was just another test of strength and character that drove her.

A lot has stood in Calhoun’s way and could have deterred her from her path but loses in her life forged a motivated ball player determined to achieve her dreams no matter what.

Calhoun fell in love with basketball at three years old when her mom bought her a Toys R’ Us plastic hoop.

“My mom was like, ‘Do you want a doll? What do you want to get from Toys R’ Us?’ First thing I thought of was [a] basketball hoop,” Calhoun said.

At school, everybody knew her for basketball. Coming home, the same passion continued as she outplayed neighborhood foes on her “home-court” plastic rim.

“It was just like a natural thing, just having a ball around and being able to actually have my own hoop,” Calhoun said. “I thought at that age [it] was probably the coolest thing ever.”

Then in 2008, at the end of her fifth-grade season, Calhoun was awarded for her basketball prowess. She was invited to dinner with Mayor Antonio Villaraigosa for being an exemplary sportsman in the Los Angeles Unified School District.

“The fact that I was chosen was pretty cool,” Calhoun said. “These people actually recognize me for something that was God-given, this talent I have, it kind of just made me want to just keep going.”

Calhoun’s mom, Tina Marie, realized her daughter’s hobby was starting to become something much bigger.

At the time, Calhoun was playing basketball with all boys.

“I think that’s kind of where I built myself up,” Calhoun said. “I loved the competition that came with guys. I definitely think that helped me be a better player.”

The boys showed her no mercy. She was just another competitor and Calhoun would have to rise up to the competition. She learned to be tough at a young age. But that was a skill she acquired years before.

Growing up, her father wasn’t always around. At 5 years old he was no longer a part of her life.

“He’s the one that’s supposed to, you know, make you tough and do all this, but I kind of think [that] when that’s not there and you’re kind of just pushing yourself, you kind of just build yourself up to be the solid wall,” Calhoun said. “It definitely made me tougher.”

Without her father in the picture, she leaned on her mom and the positive energy she provided.

“When I was younger, I think my biggest motivation was just my mom, cause that’s really all that was there, that’s all I had, that’s like my rock,” Calhoun said.

Marie’s positive energy was infectious on Calhoun. That energy reflected most on the basketball court.

“I like to play happy, all the time. I think that’s the best thing,” Calhoun said. “Just being able to lock down your opponent and smile in their face is definitely a great feeling.”

Despite any turmoil from the situation at home, Calhoun looked for the silver lining in her situation. But then tragedy would strike again.

On Jan. 20, 2012, only two months into her high school freshman season, Calhoun tore her ACL in a rivalry game against Chaminade high school.

Despite riving in pain, she stayed until the end of the game to support her teammates from the bench.

“That’s the kind of kid she is, she was unselfish, she was about her team,” her high school coach Bryan Camacho said. “Her passion for the game and her love for her teammates is what makes Bre special.”

“We were beating everyone when she was on the court,” Camacho said. “Truthfully that year we would have won state, there’s no question about it.”

Calhoun would have to prove herself again next season, this time operating on her surgically repaired knee.

While 81 percent of people are able to return to sports after ACL surgery, only 55 percent can achieve the same performance level, due in large part to inadequate rehabilitation efforts, according to a study in the Journal of Sports Medicine.

Elizabeth Quinn, an exercise physiologist and fitness consultant, said it can take nine months or more before you return to your pre-injury condition with a full range of motion and stability in the knee.

Calhoun returned back to playing condition in six months.

“She worked so hard as far as physical therapy,” Camacho said. “She was unbelievable in the weight room, academically she flourished, so in every aspect, she was so hungry to get back, there’s never been a situation in my career where I’ve seen a kid just do everything she can possible to get herself back.”

Calhoun came back and made first-team honors on the All-Mission League and All-California Interscholastic Federation teams.

“She was the last piece of our puzzle of turning around Bishop Alemany,” Camacho said.

To get to state Calhoun would have to reface Chaminade high school, the team she previously tore her ACL against.

The revenge game would be even sweeter than imagined. Alemany defeated Chaminade by 13 points, this time advancing past the Southern Section final.

“A kid of her caliber, she changes your program around immediately,” Camacho said. “She was an impact player as soon as she got on the court.”

Her junior year, she put to bed any lingering questions about her rehabilitated knee.

That year, she performed at the War on the Floor “Future Stars” Showcase and later faced future WNBA superstar Jordin Canada.

Despite the basketball accomplishments, Calhoun would have to push through another family affliction during her basketball stride. After her junior year, Calhoun lost her 14-year-old cousin to suicide.

“He would always talk about my game and how I inspired him so much,” Calhoun said. “He didn’t really get to like finish his life out, so I feel like that’s definitely a big part of my motivation; being able to really do it for the kids that really can’t play or aren’t able to express themselves in the way they want to.”

Her final season, she battled to become a McDonald’s All-American Nominee and finished as Mission League Player of the Year and a top 100 prospect by ESPN scouting.

“Her story is a truly inspirational story,” Camacho said. “Bre is an unbelievable kid both on and off the court as far as her heart, her determination, it’s second to none.”

After high school, Pepperdine, Long Island University and San Jose State competed to sign Calhoun. She ultimately picked SJSU because she connected with their recruiting coach most, but a week before Calhoun arrived, the recruiting coach had left the program.

Calhoun gave SJSU a try for a few weeks but didn’t feel herself.

“You know I was kind of homesick,” Calhoun said. “Just all the bad cards were dealt and I just felt like it wasn’t for me, so I came home.”

“I think that it was too fast,” Marie said. “It was her first time leaving home, she left straight out of high school; she was only home for a week before she was sent off.”

From the summer of 2015 to the fall of 2018 Calhoun didn’t play any organized basketball.

She spent some time trying to find herself and answers on what she would do next. She learned to be a barber and cut hair, but she couldn’t ignore the itch of returning to organized basketball.

She reached out to coaches and found Kenny Plummer, head coach of the Moorpark College women’s team.

“Everybody’s timing is different,” Calhoun said. “I feel like that time definitely gave me the motivation and mentality I needed to come back and take over.”

And then Calhoun did just that. She dominated the California Community College Athletic Association.

She engraved her name in the Moorpark College record books by leading the team to their first conference championship in 28 years, their first-ever state championship appearance, and a Moorpark best 32-win season.

Her 20 points, 6 assists and 4 steals a game, each ranked in the top three for the state.

She received Southern California’s Player of the Year and Moorpark College’s Most Valuable Player and Most Inspirational Player all within one year.

Although most of the year glided by seamlessly, Calhoun and the Moorpark College Raiders fell 8 points short of becoming Moorpark’s first-ever state champions.

“You can lose at anything at any time,” Calhoun said after the game, wiping away her tears. “So just enjoy the moment while it’s there. Just capture every moment, love everything and give it your all.”

Calhoun took the loss like all the others before it, she soaked in that negativity and flipped it into a positive to drive her even further.

Calhoun’s life hasn’t always been easy, but she’s learned to grow through her adversities. She has become a determined, unrelenting, basketball player who has the ability to overcome even the toughest of circumstances. Perseverance through adversity has led to motivation for Breanna Calhoun and her future basketball career.