The brotherhood of sport, on and off the court 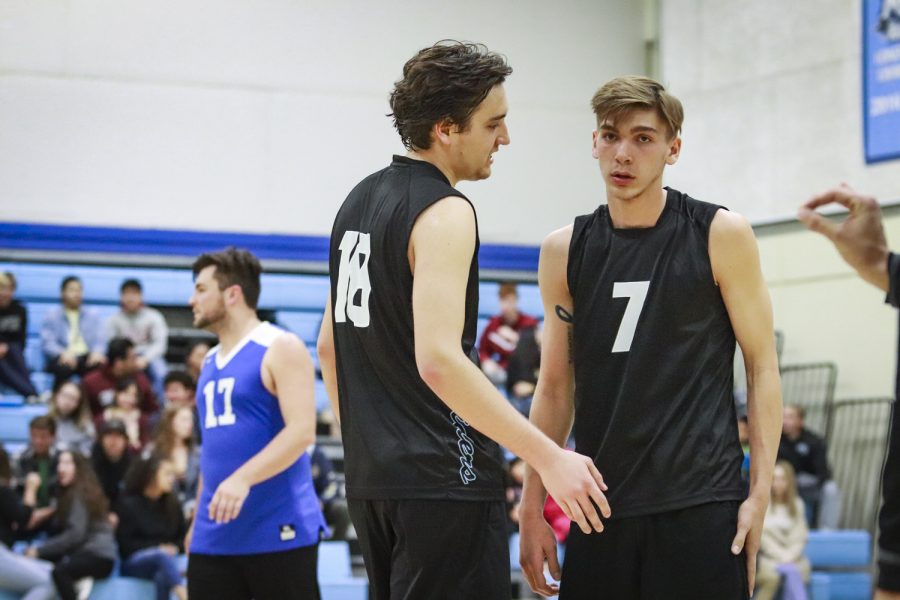 As freshman setter Steven Weese kicks his foot back to reach his Adidas Harden Vol. 2 basketball shoes, he gives them one last wipe before he throws up the ball to serve and kick off the third set of a home matchup against the Long Beach City College Vikings.

While he may wear Harden’s shoes and may be just as tall as him, Weese is more of the Raiders’ point guard than their shooting guard. More Chris Paul than James Harden.

The Raiders have Ryan Horan as their James Harden.

While he is missing the beard, opposing middle blockers still fear the freshman outside hitter.

After the ball makes its way back to the Raiders’ side of the net and finds the palms of Weese, Weese knows exactly who to flick it up too.

Horan leaps up and spikes the ball down for the kill to give Weese the assist and to put the Raiders up 1-0 as Horan records his seventh kill of the night.

As they celebrate with a high-five, five years ago neither of them pictured themselves playing college volleyball together, let alone becoming best friends.

The two met freshman year when they tried out for the Alemany High School freshman team, but their relationship had a rocky start.

“[We] didn’t really get along at first,” Weese said, as he cracked a laugh. “Ryan has a rough personality when you don’t know him.”

Despite playing an entire junior varsity season together, Weese and Horan did not talk to each other until their season ended, when they both were promoted to varsity and forced to spend time together.

“Ever since then, we’ve been close friends,” Weese said. “He’s a brother to me.”

Their strong relationship translated to their play on the court this season.

Weese finished on top of the competition with a state-leading 651 assists, and fifth in state in service aces, 33. His accomplishments earned himself being named to All-WSC 1st Team. His shooting guard and best friend, Horan, finished eleventh in the WSC in kills, 134.

Horan and Weese both quit basketball in middle school to focus on volleyball, something Harden and Paul would not approve of.

Horan started playing volleyball in sixth grade after tearing his ACL in a motorcycle accident. Weese began in eighth grade after his science teacher recruited him.

Weese, a criminology student, plans to pursue a career that will take him into the FBI or CIA.

His father, Douglas Weese, is impressed by how fast Steven picked up the sport.

“[I am] very proud of him. I saw him from when he was in junior high when he wasn’t going to play volleyball… and now [he] hopes to get to Division-1,” he said.

Horan, a business student, plans to run the family AC business one day.

He credits his competitiveness to his father, Dan Horan, who is a professional drag racer that also owns the heating and AC company.

“My dad races so that’s his sport,” Horan said. “[Now I’m] making a name for myself and my community.”

And “making a name” is exactly what Horan and Weese plan to do in their volleyball career.

After senior year in high school, they were not satisfied with the D-2 and D-3 offers they received.

“I was hoping to go Division-1 out of high school, but I never really got any serious offers,” Weese said. “I wanted to try again, put in some work here, refine my skills, and hopefully try again and see if I can go Division-1.”

Horan has the same aspirations.

Assistant coach Alex Barr has noticed how much Horan has improved throughout the season.

“He’s maturing as a player. He’s not just trying to hit the ball up there as hard as he can,” he said. “He’s making smarter decisions.”

Weese, Horan, and Raymond Parra are the trio of Alemany High School alumni that took their talents to Moorpark. The three high school friends wanted to stay together after building a strong relationship in high school.

Parra missed the entirety of the season due to nerve damage in his elbow, but hopes to return to full strength next season.

With a win over Oak Park in the first round, the playoff curse was broken. They went on to defeat Santa Barbara in the next round before losing to Newport Harbor in the quarterfinals.

Unfortunately, the first round playoff exit curse followed them to Moorpark College. After finishing the 2019 season 10-7 in the WSC, they earned a trip to the playoffs, but lost to Irvine Valley 3-1 in the first round.

However, Weese and Horan are determined to break yet another playoff curse at Moorpark in their sophomore year. With freshman Christian Escobal, Brandon Dela Fuente, and Gurpreet Ghotra all returning for their second season, the Raiders will keep a large part of their core as they look forward to their next season.