Leveled Up: The evolution of game design at Moorpark College 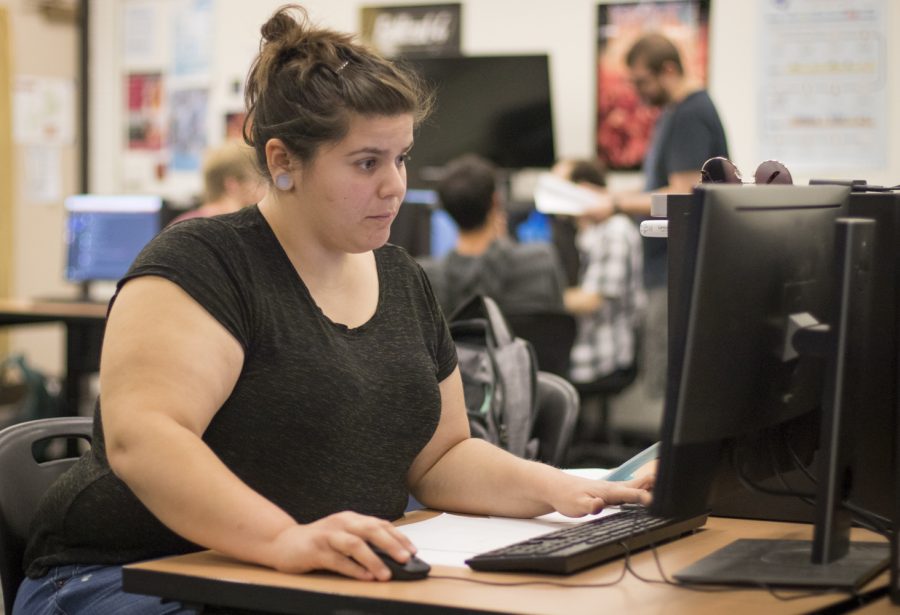 Katie Perea, a game design student, works on her computer on Tuesday, Oct. 22 in the game design classroom. Perea hopes to join a team of game designers to contribute to larger project in the industry, she said. Photo credit: Evan Reinhardt

The U.S video game industry is a behemoth, earning $43.4 billion in 2018 alone according to the Entertainment Software Association. But while games like Red Dead Redemption 2 shatter sales records and garner widespread acclaim, Moorpark College’s Game Design program is busy preparing students to break into the industry.

With fall 2016 as its inaugural semester, Moorpark College Game Design is relatively new as a program, but the classes and fundamentals that give it life go back much further.

Johnathan Bair is a full-time faculty member at Moorpark College and a key member of the Game Design program. In discussing the program’s origins, Bair reminisced about being hired as part-time faculty close to 11 years ago. At the time, Bair was hired to teach intro-level 3D modeling, a class originally under Moorpark College’s Multimedia department. However, by the fall of 2009, Bair had started to teach a new class called Introduction to Game Design, many elements of which were later spun off into other classes.

Bair elaborated on the development of the program from the first days.

“It’s expanded pretty dramatically. What once was the Introduction to Game Design class has really spread out into several classes,” stated Bair. “We refined those [classes] even further and started creating this kind of pathway for our associate’s degree.”

Interim President of Moorpark College, Julius Sokenu was once Dean of the Multimedia department during the foundational days of the Game Design program and oversaw its development. Sokenu elaborated that Moorpark College originally had a few part-time faculty who taught the same game design courses that were part of Moorpark’s Multimedia program, but there was a rapid realization that students needed more.”We realized very quickly, based on level market information that we needed to grow a program, and grow a program that would be focused really on game design and not just graphic design and not just multimedia, but really the gaming industry,” Sokenu stated.

Tim Samoff was the first full-time faculty member hired specifically for the new Game Design program. Currently professor and Program Director of the Games and Interactive Media Program at Azuza Pacific University, Samoff was hired by Moorpark College to develop the Game Design program. Samoff started at Moorpark College in the spring of 2010 and wrote curricula for all of the brand new classes that would form the rest of the new game design program, while also rewriting the existing courses. It took close to four years to get all of the courses written and through the various approval processes.

In terms of creating curricula, Samoff states he embarked on a long process of ideation initially, focused on hammering out the course pathway within the program and the fundamentals of what each class should be. Samoff called his contacts from within the video game industry that were essential to the process, crediting them with helping him emphasize certain aspects of game design like development for mobile devices and virtual reality.

Students of the Moorpark College Game Design program express a great deal of love for their department. Brad Musselman, a sophomore game design major at Moorpark College has a particular appreciation for game design within the department. As Musselman stated, “If this is something you actually want to do with your life, you don’t want it to be a subclass of something else.”

Mikayla Molnar is also a sophomore game design major at Moorpark College. Molnar particularly appreciates the applied knowledge that faculty members have from years of working in the video game industry as opposed to general academic knowledge. Musselman and Perea share this appreciation, as all three singled out their professors as the program’s most valuable resource.

It’s not just a few faculty members either, all of the faculty in the game design program have professional experience developing video games. Interim Moorpark College President Sokenu explained that ” … we’ve had part time faculty members teaching who are in the industry but who come and teach classes for us,” stated Sokenu. “Either they were [industry professionals] and they’re now full-timers here or they are currently working full-time in the industry and part time for us.”

Faculty find the transition of game design to a full-fledged program rewarding as well. According to Samoff, when game design courses were under the Multimedia department, there would generally be two types of students. Some students would just be looking to take a fun course, while others took the courses seriously and wanted there to be a full program.

Since the game design program launched, Samoff has seen a shift towards students who are more invested. Samoff enjoys this change, stating “As faculty, and especially faculty who do this sort of work outside of school, it’s really frustrating to just have people who want to have fun and it’s really life-giving to have people who really want to do it.”

Comparatively, Bair emphasizes the fundamental benefits to students. To Bair, having the game design program as its own department allows for an independent identity, a space the program can modify and belong to and a budget not tied to other programs or departments.

As Bair put it, “When a game design student walks in [to the program’s classroom] for the first time, that impression of ‘This is ours, this is our space, this is our safe area … ‘ That’s what this lab gives us, it gives us our identity. It’s the same thing with having our own degree. It’s ours, it’s not a Bachelors in Multimedia – Game Design. It is a Game Design Associate’s Degree, and that’s amazing.” [Bachelor’s degree is not in reference to Moorpark College—Editor.]