A year after Borderline, the Healing Arts Festival helps students to recover 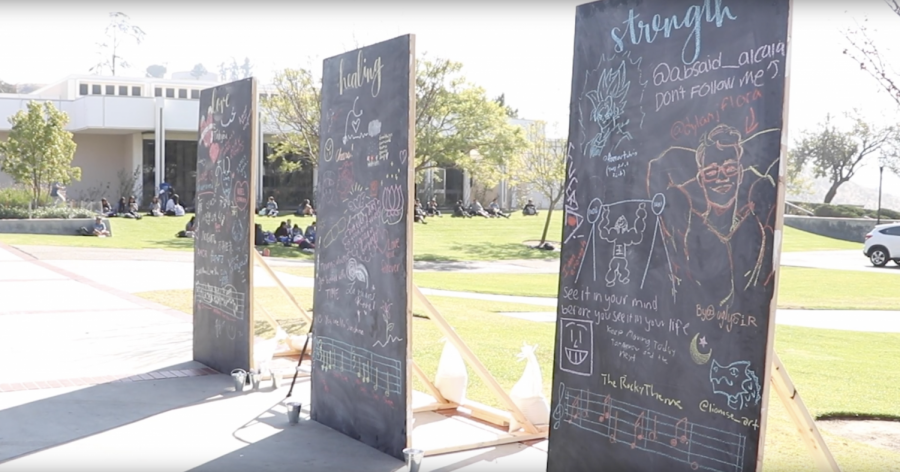 Students were given the opportunity to express grief through art at the Healing Arts Festival on Thursday, Nov. 7 at Moorpark College.

One year ago, tragedy stuck Ventura County after a gunman stole the lives of 12 people at Borderline Bar & Grill. As the community grappled with devastation, the Woolsey Fire began immediately the next day prompting many of those in mourning to evacuate their homes.

On the anniversary of the shooting, Associated Students of Moorpark College collaborated with the non-profit Artists for Trauma to hold a Healing Arts Festival on the quad. The event ran from 10 a.m. to 2 p.m. and was intended to help the community recover from grief through artistic expression and fraternity.

ASMC student government representatives Poon Yuwawanit and Zubair Sidhu helped organize the event and were committed to share the intersection between art and healing with Moorpark College students.

“We’re here to advocate for students. We want to show the campus we are here for you and that you’re not alone,” Yuwawanit said.

Yuwawanit and Sidhu centered the festival around art to pay homage to Moorpark College student Noel Sparks who’s life was taken at the Borderline shooting.

“We really felt that it was important to include the art department because Noel Sparks was such an influential person in the art and music department and it didn’t feel appropriate to have an event commemorating Borderline without having them involved,” Sidhu said.

The festival began with guest speakers on the main stage who shared personal stories about how trauma has affected their lives and the ways they use art, poetry and spirituality to cope. After the speakers, participants were welcome to visit booths with student art on display, participate in poetry and letter writing, and contribute to community murals.

Artists for Trauma played a large role in making this event possible. The organization is dedicated towards offering free creative outlets for survivors of trauma to heal. The Artists for Trauma booth distributed free boxes of art supplies and provided blank mural canvases for people to express themselves on.

“We are about using arts and entertainment in a positive fashion as a healing platform. We believe that it is incrementally a valuable, valuable tool,” Board President and CEO of Artists for Trauma, Laura Sharpe emphasized. “It’s all about healing.”

Third year Moorpark College student and studio art major, Kathryn Colabella found the event to be helpful towards easing the pain of the tragedy. Mourning the loss of three friends, including Noel Sparks, Colabella was evacuated for four days due to the Woolsey Fire.

Colabella’s return to her normal routine was difficult, but by immersing herself in art, she was able to deal with the grief.

“I threw my first 12 inch cylinder and I cried. It was like the first time I actually smiled since it happened and then I was like I’m just gonna throw the rest of the bag of clay and I got my 15 inch cylinder and I cried more,” Colabella shared. “Those two pieces are my two favorite pieces that I’ve ever made. I gave one to Noel’s mom. Just the act of giving that to someone who lost their everything, knowing that she has that and she can look at it and know that that helped me smile again … ”

The memories of Noel Sparks remain vivid in Colabella’s mind, however with time and connecting with others Colabella believes healing is achievable.

“I think what they’re doing today is amazing. Kind of gives that sense of community, that sense of family that I was talking about. There’s people here that are still battling with this. We walk around campus and we don’t think about it, I think about it all the time and it’s good to know that there’s other people like me here that were affected by it and that are still hurting and still trying to heal,” Colabella expressed.

In a community stricken with what can seem like never-ending fires and tragedy, the Healing Arts Festival provided a cathartic opportunity for recovery.

“Nobody thinks that it’s going to happen in their community. And when it does happen they don’t know how to process it, how to react to something like that,” Sidhu said. “It was really important that we have something like this, that we give the students the opportunity to recover, to heal and to create something meaningful from what was a really destructive period.”