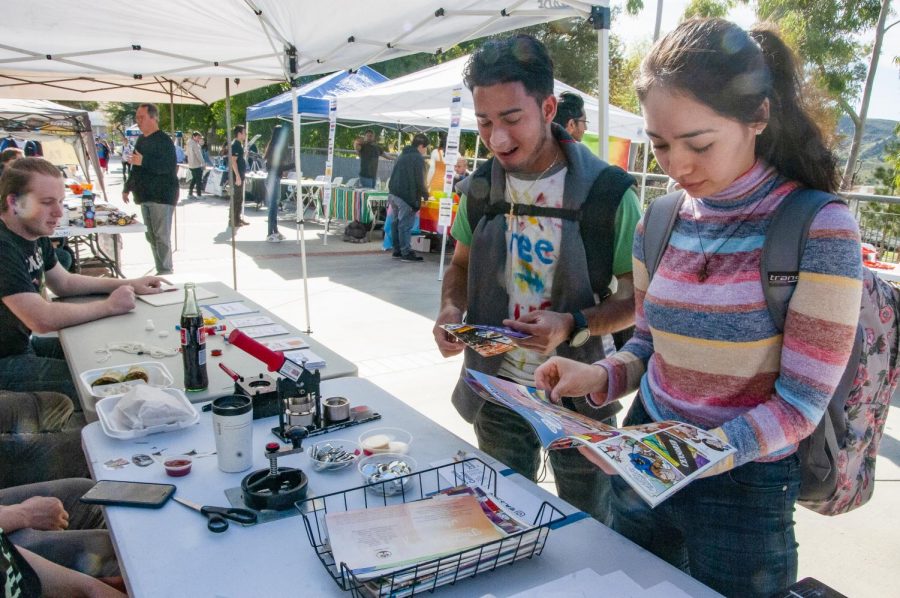 Carlos Hernandez, left, and Carmen Fregoso talk with representatives of the Moorpark College MakerSpace booth at Club Rush on Tuesday Jan. 28. Hernandez and Fregoso were making complimentary custom pins with materials set out by the club. Photo credit: Morgan Ellis

By Morgan Ellis and Gavin Woods

In an effort to help students feel more at home on campus, the Associated Students of Moorpark College hosted their spring semester Club Rush. Located along Raiders Walk on Jan. 28- 29 from 10 a.m. – 1 p.m., students were able to take their time meeting officers and members of the continuously growing variety of clubs on campus.

Devika Bedi, ASMC Director of Student Organizations was a crucial figure in putting together this event. According to Bedi there were about 42 clubs in attendance, and of those about 12 were newly formed.

On Raider Walk Spectrum Club handed out candy, contraception and pronoun stickers. The International Relations Club had discussions on any and all international matters. The Engineering Club, who frequently competes in robotics tournaments, had one of their creations on display, along with countless others.

Among the crowd, one club that stood out was the Muslim Student Association. Club Rush was perfectly timed to coincide with Islamic Awareness Week so the club took full advantage to educate, address stereotypes and Islamophobia as well as bond with members and interested students who came up to their booth.

On Tuesday, they celebrated “Meet a Muslim Day” where they hand made frames for people to take photos in and handed out roses and candy. For the second day of Club Rush, they had an early acknowledgement of World Hijab Day, where they encouraged people to take a complimentary scarf and “strike a pose.”

“There are a lot of misconceptions about what [hijab] is and what it truly means, so we’re here to break that stereotype and tell people what it’s about,” MSA Head of Events Maisam Barakat said.

The Moorpark College MakerSpace booth was also in attendance, where representatives showed off some of the projects they have had the opportunity to create. They also helped passersby make a custom pin for themselves.

Funded by a grant from the California Community Colleges Chancellor’s Office, the MakerSpace allows students access to high tech equipment and workshops to create virtually anything they can think of.

For UX Design’s first Club Rush, Ortega and Perez were mainly focused on educating potential members on what the club is about.

“We were more so just focused on if anybody had any questions, that we were able to answer them,” Ortega mentioned.

They encourage students in any field of study to explore the topic of user experience design.

“It’s very interdisciplinary. There’s a lot of people regardless of their major that might be able to get something out of this,” Ortega said. “It might even open them up to a new world that I feel like a lot of people don’t even know exists. Even me, before I joined this club I didn’t even know what UX design was.”

For more information about all of the Moorpark College clubs, there is a list published on the school’s website.