Peace in Concert brings inspiration and harmony to people in need 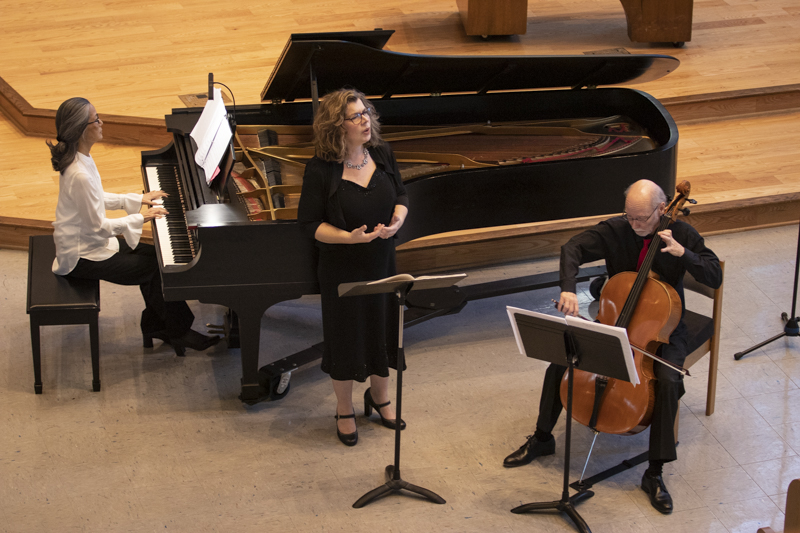 Tomiko Hamada Taylor on piano, Dana Rouse on vocals and John Fare on cello perform during the Peace in Concert performance on Saturday, Feb. 1, at California Lutheran University. The Peace in Concert aims to promote connection and harmony using music and art. Photo credit: Evan Reinhardt

On Saturday, Feb. 1, Peace in Concert was held at California Lutheran University’s Samuelson Chapel at 3 p.m. The event consisted of volunteer musicians who took turns playing different sets. The musicians performed classical pieces, and even a couple songs by John Lennon.

Founded in 2015, Peace in Concert’s goal is to promote global connection and harmony using the inspiration of music and art. The performance was also streamed through the website and Facebook to watch.

Tomiko Taylor, Peace in Concert founder, is a music therapist from Japan. Taylor loves to provide the concert via the internet so that the music may be transported to the homes of others around the world.

“Music doesn’t require explanation, without words you can feel it,” Taylor expressed.

Taylor revealed that many people feel tension and fear of both the current tragedies and conflicts going on around the world. Although the goal of Peace in Concert is not to make peace between conflicted people, it is to bring music into people’s minds occupied by negative thoughts.

The concert opened with the piece “Qui Sedes” by J.S. Bach. Taylor played on piano. Along with her was Fredric Beerstein on the oboe, Eric Johnson-Tamai on the bassoon and Dana Rouse as vocalist. The four created a beautiful, peaceful atmosphere as everyone in the chapel fell silent, mesmerized by the sound of music.

When asked about his oboe experience, Beerstein shared, “I started on my 12th birthday. Before that, I had piano lessons and violin lessons.”

Beerstein remained committed to the oboe, and is an oboe instructor at California Lutheran University. Beerstein has preformed at Peace in Concert since 2018.

“I think music is a universal language, and I think it can reach anybody, anywhere. And I think that’s a bridge over the waters between people,” said attendee Richard Seibert of Simi Valley.

Peace in Concert also featured Alexander Michael Tseitlin on violin, John Fare on the cello and Christine DeKlotz on piano. The three played a piece by Brahms together.

DeKlotz, from Moorpark, has performed for Peace in Concert every year since it began in 2015. She went on to explain the way music made her feel both energized and filled with inspiration

“I was six years old. I just heard music in the house, my mom played it. I was dying to play,” described DeKlotz.

Some of the pieces involved Rouse’s vocals, who has performed theater, operatic roles and teaches privately as well as at California Lutheran University.

Other pieces that did not include vocals were “Penny Lane” by The Beatles, which was uniquely played utilizing the oboe, bassoon and piano. The concert ended with “Imagine” by John Lennon, performed by Beerstein, DeKlotz, Fare, Johnson-Tamai and Tseitlin.

“This is a concert to promote global connection and peace. This is for everyone. But we’d especially like to mention that … if you are sad, we’d like to play for you. If you can’t get out from your house in some reason, this is for you.” pronounced Taylor.