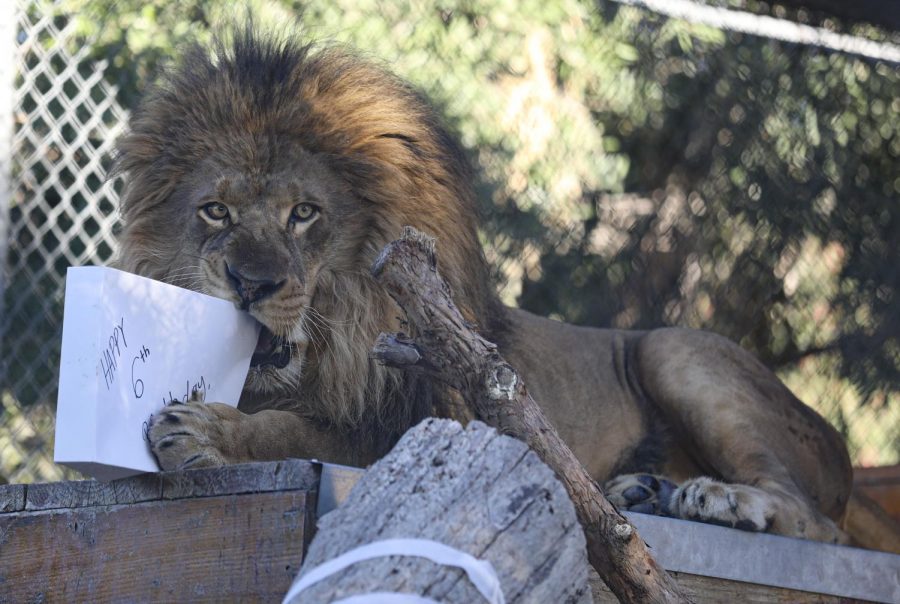 Ira the lion chews on a gift filled with meat he received during his birthday celebration at America’s Teaching Zoo on Saturday, Feb. 1. Ira was celebrated for his sixth birthday. Photo credit: Ryan Bough

America’s Teaching Zoo celebrated Ira the lion’s sixth birthday at Moorpark College on Feb. 1. The Exotic Animal Training Management program hosted various activities for its visitors beginning at 1 p.m. with cake. Following, guests were able to get a behind the scene experience as they presented Ira his gifts at 3:30 p.m.

The event also gave the public a glimpse at a larger enclosure called Ira’s Kingdom, which is under construction and set to open in March. The improved enclosure was made possible by $550,000 in donations raised by the zoo last November at their Rendezvous at the Zoo.

Many students and locals ventured out to see the animals and festivities. Zoo Operations Instructional Technician Mara Rodriguez was glad to see the turnout.

“This is our largest crowd yet. All of our guests are taking advantage of the food trucks, chalk walk and making crowns,” Rodriguez said.

Kids were able to draw pictures and get their faces painted while animals were brought out by EATM staff to interact with the crowd.

The zoo is home to 130 different kinds of animals including tigers, a hyena, mountain lions, monkeys, birds, a reptile exhibit and a 96-year-old Galápagos tortoise named Clarence, which were all were available for the public to see.

“Last year it was raining during the celebration. But we still came out in the rain and sang Ira happy birthday,” Dobosi said.

At 1 p.m. the crowd watched as Ira was given several cakes made of meat. EATM students then served traditional cake for the birthday guests.

Moorpark College student Stacey Bowhay, from Simi Valley, said she had been wanting to visit the zoo when she heard about Ira’s birthday.

“The zoo is really nice. There’s so many kinds of animals to see, and the cake was good too,” Bowhay said.

Lillian Dwight brought her 5-year-old niece, India Aragon, from Ventura for the party.

“I think it was great to be able to see the lion up close. India drew a picture and gave it to Ira for his birthday,” Dwight said.

Moorpark College’s previous lion Chad passed away from old age in 1998. The zoo’s symbol is an African lion and they’d been without one for 16 years. Ira first came to Moorpark College in 2014. Ira is on loan from Lion Habitat Ranch in Henderson, NV, whose mission is conservation and protection.

“They had this lion cub who was very friendly while interacting with people, and with other lions, and they thought he’d be a great fit with us,” Rodriguez said.

While Ira was first on America’s Teaching Zoo’s list to receive a larger enclosure, zoo staff Shelly O’Brien explained the zoo is also fundraising to build a larger enclosure for the their two-year-old resident Bengal tigers, Neil and Karma. Neil was rescued from Nicholas Perkins, convicted in January of illegal possession and mistreatment of the cub. America’s Teaching Zoo was then able to adopt Karma, similar in age to Neil, as a life-long partner.

“It’s our largest event on campus. I call it the zoo on steroids. There’s more opportunities to learn and observe animal care, conservation and to see what it is we do here”, Rodriguez stated.