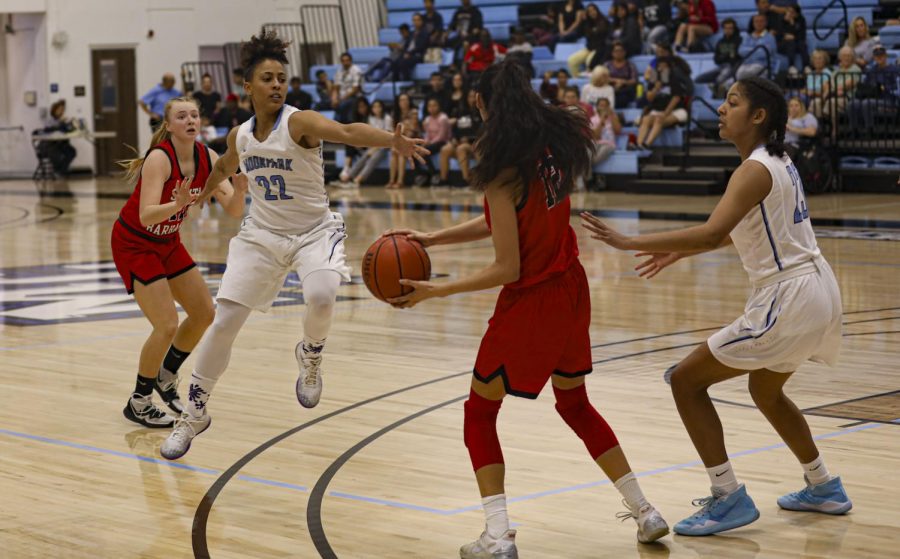 Star guard Bree Calhoun finished with 17 points and reached a great milestone on Saturday, scoring over 1000 career points at Moorpark. Calhoun is currently averaging 15.9 PPG on a very efficient 47.8 field goal percentage to go along with 7.5 APG.

When asked about this impressive accomplishment after the game, Calhoun responded with pride.

“It’s a big accomplishment and being able to do that for the school feels amazing,” stated Calhoun.

Although up 20 at halftime, the Raiders allowed Santa Barbara to match them at 20 points scored in the second quarter. Coach Plummer knew he had to fix the team’s game plan at halftime.

The Raiders came out energized in the third quarter as their aggressive defense forced turnovers and bad Santa Barbara shots which led to easy baskets for Moorpark. They were able to gain a comfortable lead after outscoring Santa Barbara 29-19 in the quarter.

“We said that going into halftime we had to make some adjustments and the team executed very well,” Plummer said.

The Raiders are very well-coached and prepared before every game as Coach Plummer always emphasizes good effort and team defense.

One of the main reasons of success for Moorpark is credited to their amazing team chemistry. The Raiders communicate on both sides of the ball and love playing together.

Carrasco was asked about the team’s chemistry following the victory over Santa Barbara.

“We love playing basketball together, we’re all hoopers and love each other’s company and it just makes everything fun,” expressed Carrasco.

The Raiders are currently averaging the most points in conference play at 91 PPG, trailed by Mt. San Jacinto who averages 90.3 in second.

Coming in 3-0 during conference play is only the start of what the Raiders are trying to accomplish with a championship set in their sights. Coach Plummer knows they still have things to improve on as they continue in pursuit of the championship.

“We gotta be consistent on the defensive end, sharing the ball offensively, and playing together,” Plummer said.

The Moorpark Raiders’ next test will come in the form of two straight road games beginning Wednesday, Feb. 5 facing Oxnard (7-9, 1-2) at 5 p.m.