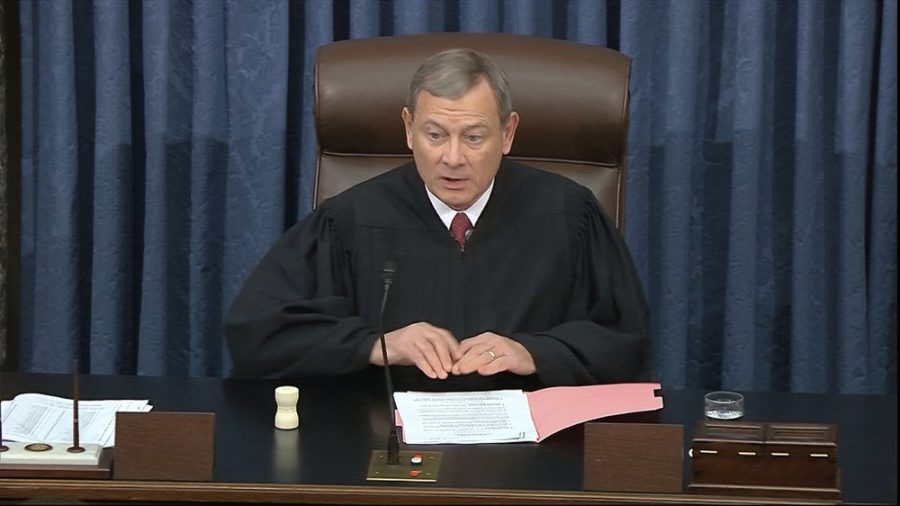 Chief Justice John Roberts speaks before the vote in President Trumps impeachment trial in the U.S. Capitol in Washington on Wednesday, Feb. 5. Image taken from video from the Senate Television via AP.

The Democratic Party stuck together as all senators voted to remove Trump from office. The Republican Party however, had one crossover voter. Senator Mitt Romney from Utah voted to convict Trump of abuse of power.

The Senate vote comes two days after the Iowa caucus, which currently puts Pete Buttigieg in a narrow lead to win the Iowa caucuses with 26.2% of votes, which is 0.1% higher than the runner up, Bernie Sanders.

In regard to the Republican Iowa Caucus, Trump won with 97.1% of the vote. Behind him, Bill Weld received 1.3% of the votes. Trump had 39 delegates while Weld had one delegate.

The Iowa caucuses act as the first major vote for the presidential primaries and are a good indicator of how candidates will perform in future elections. Currently, Pete Buttigieg and Bernie Sanders are tied with 11 delegates while Elizabeth Warren is trailing with five delegates.