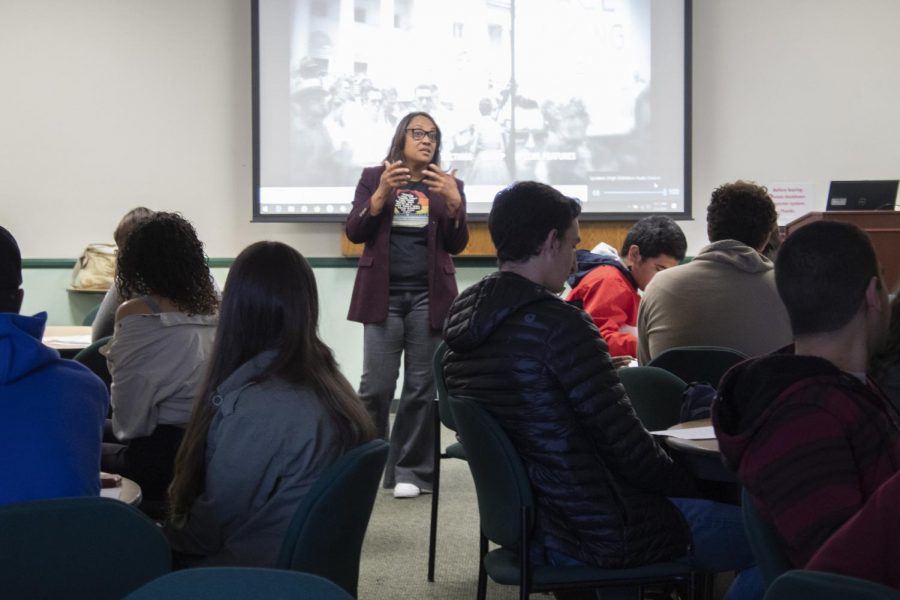 Tamarra Coleman, English Professor and Multi-Cultural Project Specialist, speaks to Students before showing the movie ‘I am not your Negro’ for Black History Month, on Wednesday, Feb. 5. The movie was shown in the Campus Center Conference Room. Photo credit: Scott Mazzarano

The two screenings will serve as the bookends for Moorpark College’s celebration of Black History Month. The screening of “I Am Not Your Negro” was the first event of the month, and the screening of “Claudine” will be the last.

The screening of “I Am Not Your Negro” took place Feb. 5 and was hosted by English professor and Multicultural Projects Specialist Tamarra Coleman. The screening took place in the campus center conference room.

The documentary, directed by Raoul Peck was released in 2017. Samuel L. Jackson narrates the words of writer James Baldwin, who shared the story of race in America in his unfinished novel, “Remember This House.” 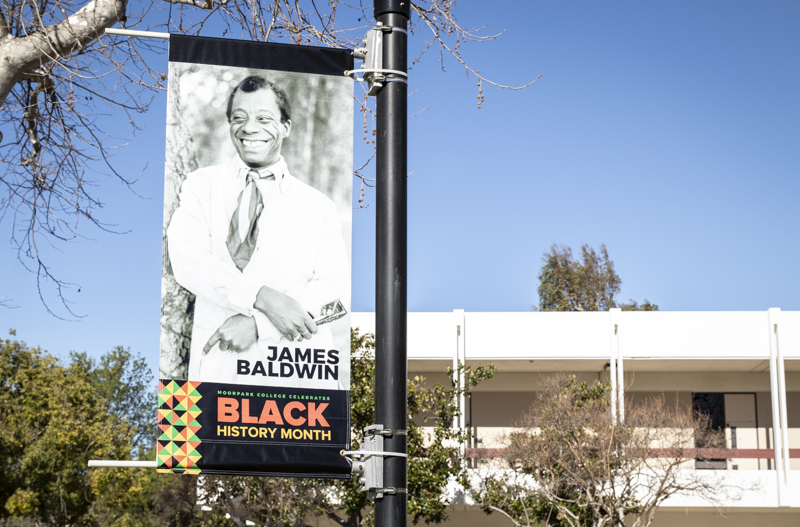 A banners of James Baldwin and other black icons are hung up around campus for Black History Month, on Tuesday, Feb. 4. Photo credit: Evan Reinhardt

After the screening Coleman invited the students to stay and attend an open forum discussion to share their thoughts and feelings about the powerful film.

To begin the group discussion, Coleman described Baldwin as “the love of my life,” and stated every time she hears his words they still give her as strong of a feeling as the first time she read them.

Moorpark student, Jesse Riser-Perez from Agoura Hills shared how the film impacted him.

“I would like to highlight how effective and powerful it was that they used footage from many many years ago and footage now so you could really see the subtle differences,” Riser-Perez said. “Yes it is still happening, and yes we are making strides to rectify it, but it is still very unfortunate that this is happening like with Trayvon Martin and all those other poor unfortunate souls whose lives were taken from us too soon.”

The second screening of the movie “Claudine” will be hosted by Film Professor Lauren Snowden on Feb. 26 and will act as the last event of Moorpark College’s celebration of Black History Month.

This is Professor Snowden’s first year as a full time professor on campus, and is the first screening she will be hosting for the public at Moorpark College.

“It’s not an unknown fact that there is not a large population of African American faculty on campus,” Snowden said. “Even though this is my seventh year on campus, being full time this year, for the first time, is allowing me the opportunity to contribute my perspective and help to broaden the depth of diversity as far African American experience goes.”

The film “Claudine” has cultural and historical significance for African Americans. It was released in the middle the 1970s, during the Blaxploitation era of filmmaking and the wake of the civil rights movement. While most films depicted African Americans using pejorative stereotypes, “Claudine” broke the mold by telling an honest human story about the struggles of raising a family in Harlem during the time.

“I’m glad to have the opportunity to share this film, and I hope the students enjoy it. As a black woman and also as a film studies professor, I think this film is very relevant to our culture even still today,” Snowden said.

For additional information about specific times and locations for the film screenings and other events view the listing of events on the Moorpark College website.