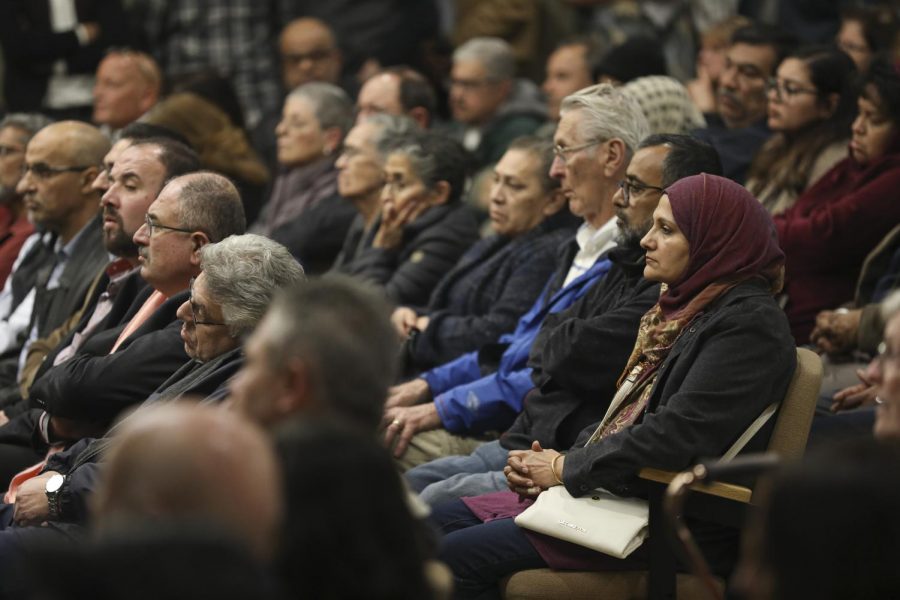 Crowds of Simi Valley residents pack the council chamber of Simi Valley City Hall during the council meeting on Monday, Feb. 10. Many people attended in order to either support or oppose item 4A, an item addressing the expansion of a local mosque. Photo credit: Ryan Bough

The Simi Valley City Council had a full house during the public meeting on Monday, Feb. 10. Majority of the crowd were there for agenda item 4A, which was a public hearing to consider a pre-screening review to change the land use designation from a neighborhood park to general commercial use so that renovations to the Islamic Society of Simi Valley could be made.

The council’s intent was not to approve the project but was to give feedback and direction to the applicant, Green Crescent of Simi Valley also known as the Islamic Society Of Simi Valley.

Sana Shah, president of the Muslim Student Alliance at California Lutheran University, shared the future plans for the mosque.

“They want to expand our mosque to accommodate the needs that we need as a community, we’re building it a little higher up so it’s going to be two story instead of our one story,” Shah said.

The current building, built in 1966, would require a complete demolition of the existing structure in order to begin the desired renovations.

Sheikh Omar Jubran, a leader of the Muslim community in Simi Valley, was one of the first to speak during public comments.

“It’s very difficult for somebody to worship when they have to go to the bathroom and there are three people in front of them, I think the connection between that person and God is kind of interrupted a little bit and we need to fix that because we only have one bathroom for men and one bathroom for the women,” Jubran said. “It’s going to beautify the area, it’s not going to change anything.”

Not everyone was in favor of the proposal. Simi Valley resident Gary Anderson spoke about the dangers of the traffic that he has seen on the street.

“We have a traffic problem on Township [Avenue], myself and a couple of other speakers you’ll hear from witnessed three children, and then a fourth, almost being killed on Friday,” Anderson said. “I don’t have a problem with your mosque but I’ve got a problem with the cars, big time.”

Mayor Keith L. Mashburn called for a quick break when the crowd became emotional after an unnamed speaker raised concerns about the potential for violence to be brought to the community by radicals. Some members of the crowd could be heard shouting “shame” after the speakers comments.

Before the public hearing continued, Jubran spoke to the crowd about their behavior.

“I would like to respectfully ask you not to respond to anybody that speaks,” Jubran stated. “Everybody has their own opinion, everybody has the right to speak whether it’s in our favor or against us.”

The motion passed unanimously by the board, with a standing ovation from most of the crowd.

Mashburn spoke to the crowd after the applause died down.

“This is really and truly just the beginning, you’re gonna have to go through the whole planning process. We’ll be talking to staff, I think we all heard loud and clear that traffic is a major problem,” Mashburn said.

Igbal Abdalla, a member of the Muslim Student Association at Moorpark College spoke about the community atmosphere at the mosque.