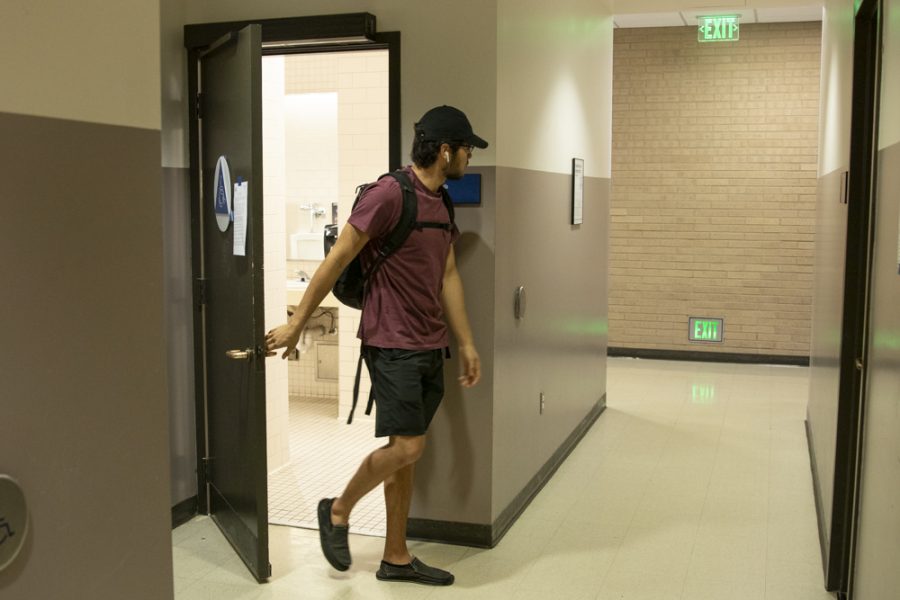 Carter Bell, Moorpark student, leaves one of the gender neutral bathrooms in the AC building, on Thursday, Feb. 13. According to Carter, bathrooms should be a place of privacy and safety, not awkwardness and fear. Photo credit: Evan Reinhardt

An invasion of privacy incident was reported by a female student on Monday Feb. 10 to the Moorpark College campus police.

At around 4 p.m. the student was in a gender neutral restroom on the second floor of the Academic Center building. The student left her stall to wash her hands at the sink when she noticed a hand reached out from another stall and pointed the camera of an iPhone with a black case at her.

The student identified the suspect was wearing black pants and black ‘old skool’ style Vans which have long white stripe on the side. She did not notice any distinguishing marks or features on the hand. Though unsure if any photo or video was captured of her, the student left the restroom in a panic and returned to her class.

It was after class when she contacted campus police to report the incident, estimated to be about an hour and twenty minutes following the occurrence. Campus police responded immediately and began their investigation which included collecting statements from the victim, searching for any potential witnesses and analyzing camera footage located in the hallways of the AC building.

Lieutenant Andy Huisenga of Moorpark College campus police commented on the status of the investigation.

“These are very difficult situations for us to deal with because of the privacy of a restroom … a lot of the cameras just don’t face exactly right where the bathroom entrance and exit is. So the investigation is still ongoing. The officers are still trying to paint video based off the description of Vans and black pants,” Huisenga said.

At around 8:30 p.m. on Feb. 10, Moorpark College students were notified of the incident through a “Timely Notice” email or text, depending on the students notification preferences. The Clery Act ensures that higher education institutions in California must provide a “Timely Notice” regarding any crime that may be a threat to students and employees. 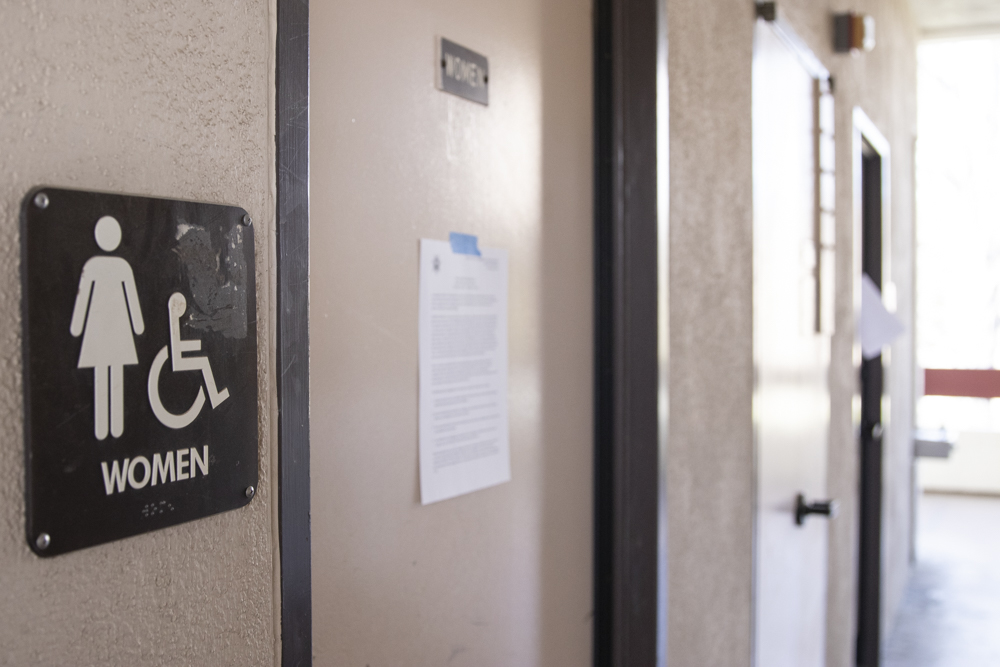 Timely notices are hung up on all bathrooms, including the women's bathroom on the second floor of the HSS building. The bathroom is the location of the first perpetration Jan. 13. Photo credit: Evan Reinhardt

This marks the second incident of this type on campus, the first of which occurred on Jan. 13. The first incident involved a female student using the women’s restroom on the second floor of the Humanities and Social Sciences building. She was seated in a stall when another person entered the restroom, reached their black iPhone over her stall door and then left the restroom.

Campus police are not able to establish a connection between the two incidents considering there was only a vague description of the first perpetration.

Psychology professor Julie Campbell, whose office is in HSS, ran into the first victim immediately after the incident occurred and consoled her.

“I felt for her. It appeared to be very alarming and disturbing to the student. It always bothers me when students don’t feel comfortable on campus,” Campbell shared.

Students on campus remain vigilant and aware of their surroundings more than ever following the two incidents. Second year student Jasmine Saleh shared her reaction to the second notice.

“It’s pretty disturbing and it makes an individual feel really unsafe, because we come to school to study and learn,” Saleh expressed. “We have police on campus and everything, but it’s also scary knowing that any guy [person] can just walk up and take a picture and get away with it.”

Though campus police still considers these incidents as isolated events, Huisenga advises students to be aware of their surroundings and to immediately report any crimes to campus police.

“In both incidents, we were kind of behind the eight ball right away. We had hours. The first incident actually, days had gone by since it occurred before we were notified and in this one approximately an hour twenty minutes,” Huisenga said. “Call the police right away, that way we can get on scene right away and we have a better opportunity to apprehend that suspect right then, rather than waiting an hour and a half or a day or two.”

As both investigations continue, campus police will be increasing the amount of patrolling they do on foot, especially targeting areas devoid of cameras. Though campus police cannot implement additional camera systems themselves, Huisenga affirmed that the school does intend to update and improve their emergency services in the future.

Additional resources and support for victims of any trauma are available at the Student Health Center. Health Center director Sharon Manakas emphasized the benefit of seeking out help from the only place on campus that provides free and confidential counseling.

“It’s a safe place for them to come and talk about things, anything they could be dealing with. This [invasion of privacy] or stalking or sexual assault or any other needs that they might have. And sometimes these things can trigger other experiences that they’ve had so students might need those resources as well,” stated Manakas.