Romeo and Juliet makes a dramatic debut at Moorpark College 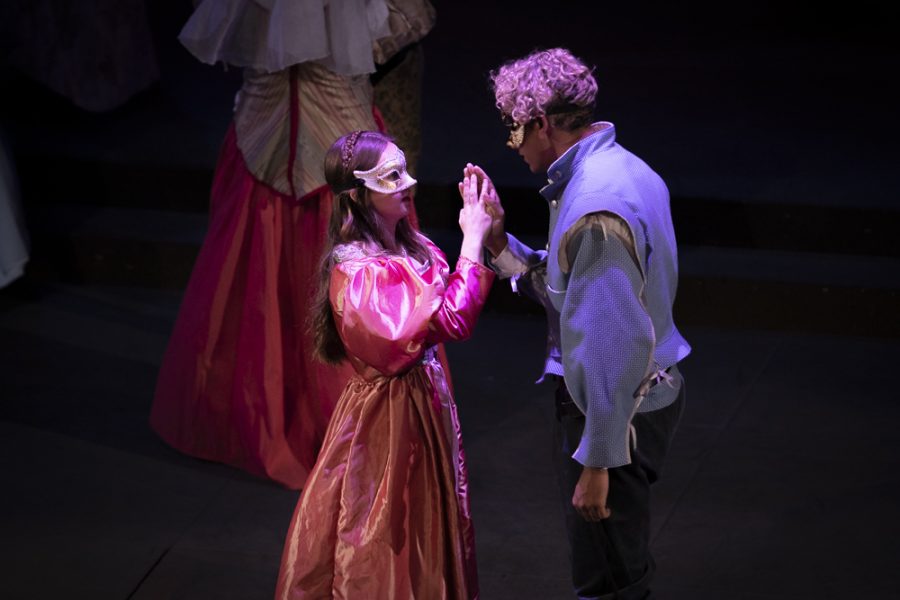 With an estimated 200 community members in attendance, opening night was successful. Family members and friends of the actors were in attendance. The atmosphere was full of excited energy and anticipation.

Director of the play, John Loprieno was in attendance speaking with families and students who were waiting for the show to start. It was the first play of the semester and according to Loprieno, this would set the tone for the remainder of the semester. 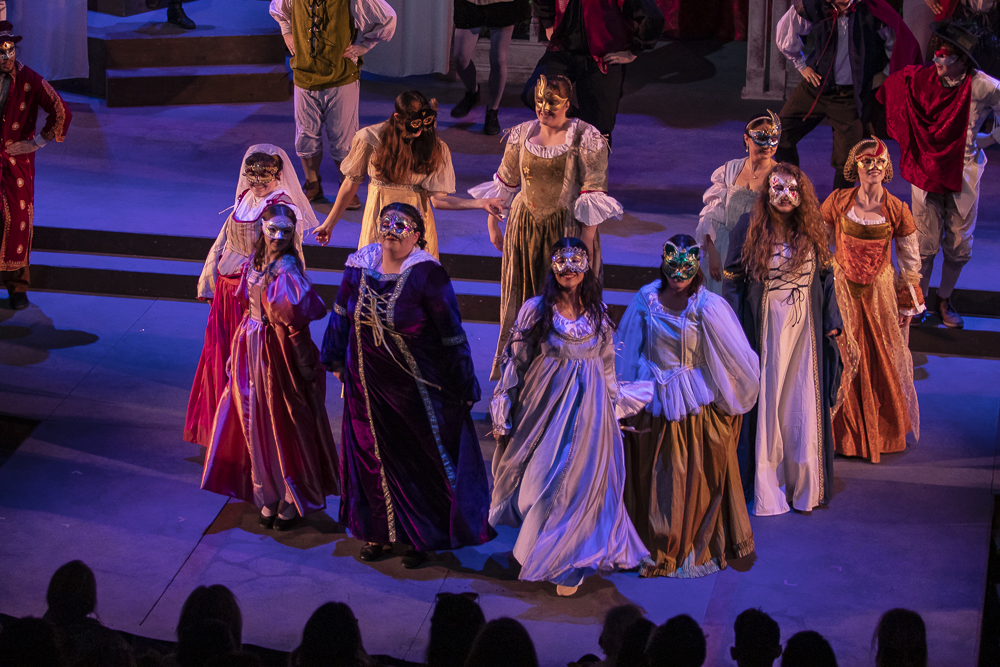 The cast of Romeo and Juliet perform the scene where Romeo meets Juliet for the first time, on Tuesday, March 12, in the performing arts building. Photo credit: Evan Reinhardt

In directing “Romeo and Juliet,” Loprieno achieved a long-time goal of his.

“This is a play that I wanted to direct for some time because when I was 21, I played Romeo myself. So it’s always been on my bucket list to want to direct it,” Loprieno said. “It’s 100% Shakespeare. We made a few minor cuts but the whole production is pure Shakespearean text.”

The set was what many would call larger than life. With the iconic balcony and Italian Renaissance design of the city, the set really brought the play to life. Props and set design such as trees, swords, bedroom sets and tombs were used to showcase the realistic portrayal of the play. The audience seemed intrigued by the usage of the realistic props, particularly during the sword fights. 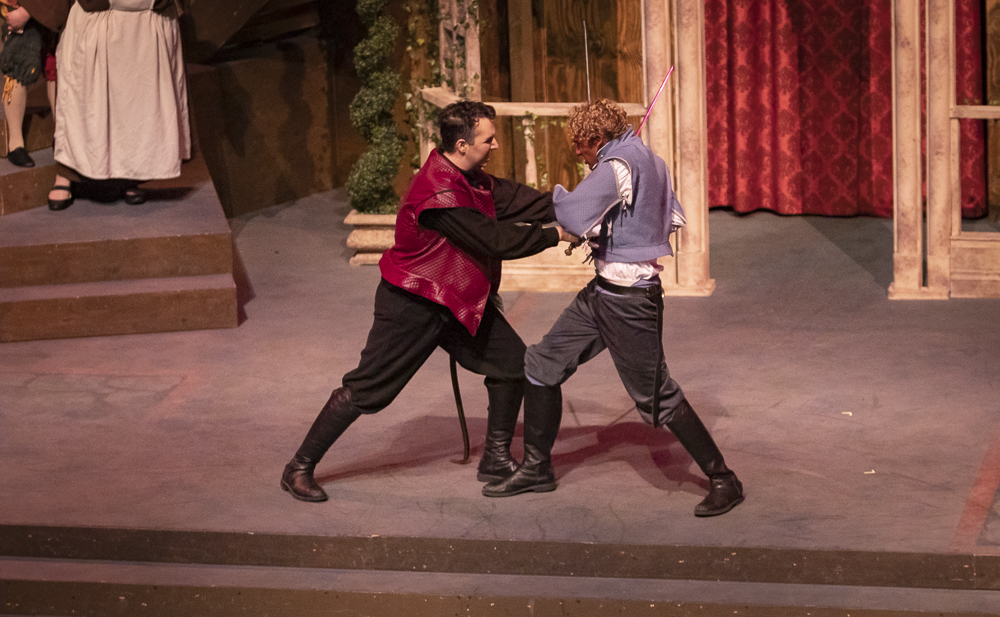 Jaz Johnson, left, as Tybalt, engages in a duel with Seth Gunawardena, as Romeo, during the Romeo and Juliet performance on Thursday, March 12, in the performing arts building. Photo credit: Evan Reinhardt

The lead performers Seth Gunawardena and Abby Holland, who played Romeo and Juliet, spoke about what this play will do for their personal acting careers and lives, as well as for the Moorpark community as a whole.

Holland, in particular, discussed what she hoped people would take away from the performance.

“I really want people who see the show to understand that the way our world is today, with its moments of darkness, to see that Juliet was constantly given a reason to be heart broken but also reason to be joyful and grateful,” Holland emphasized. “That’s what I want people to take away. That you don’t have to be sad. There’s always something to be happy about and always try to keep and positive mindset. Positivity makes all the difference in our lives and in our world.” 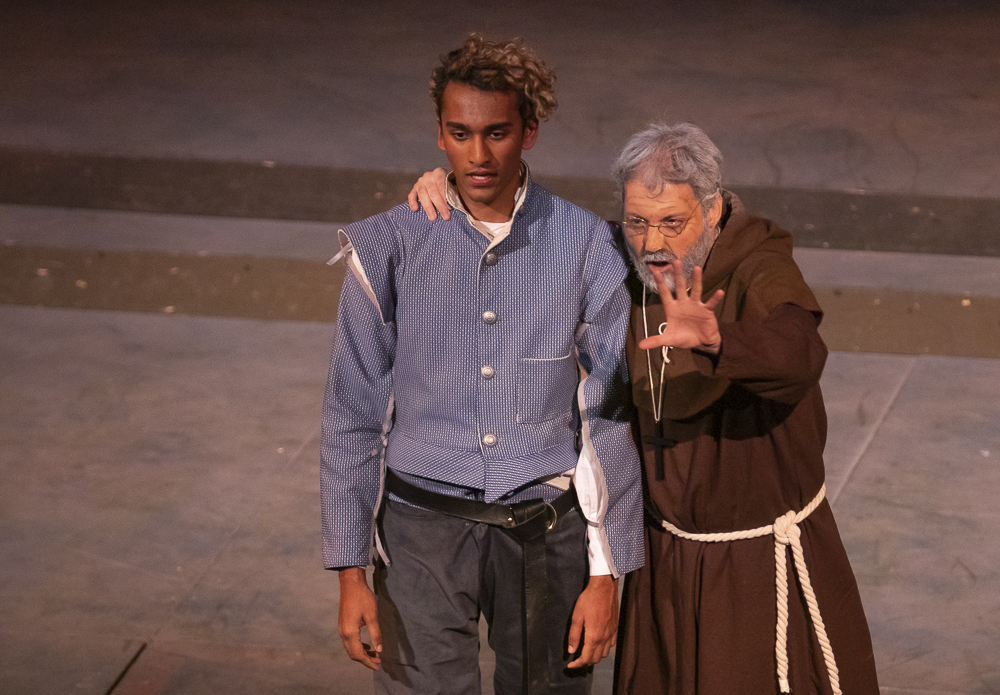 Seth Gunawardena, as Romeo, listens to advice from Pi McAuliffe, as Friar Lawrence during the performance of Romeo and Juliet on Tuesday, March 12, in the performing arts building. Photo credit: Evan Reinhardt

Meanwhile, Gunawardena spoke on the impact Romeo and Juliet had on him and how the production might affect aspiring actors within the Moorpark community, as well as its students.

“Shakespeare is a poet and this play is still relatable to this day, these beautiful messages of love and conflict. Romeo and Juliet is so relatable to this day because the Capulets and Montague’s hated each other for no reason which is very similar to the social climate we live in today,” Gunawardena said. “Almost every male actor ever has wanted to play Romeo so this was an awesome opportunity.”

The show ended with a meet-and-greet with all of the actors. Acting agents, family members, friends and students were all in attendance. Sadly, the show was short lived in response to campus closures in light of recent COVID-19 concerns. Visit the Moorpark College PAC Instagram for more information on recent cancellations.