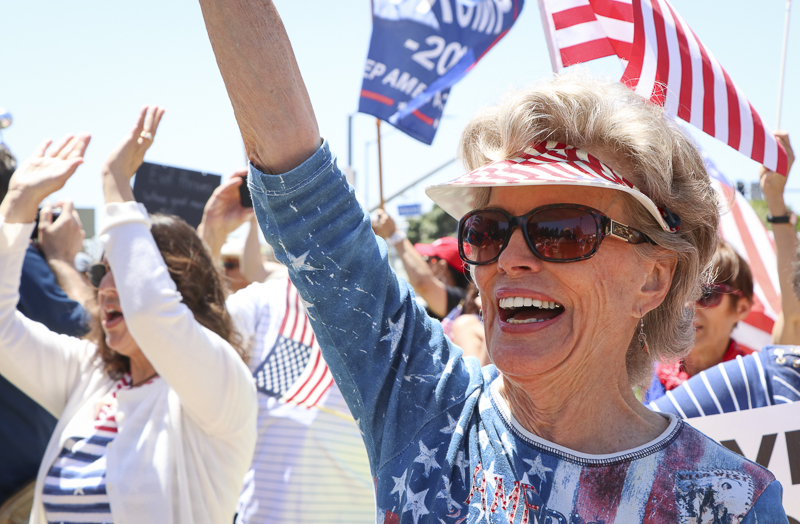 Dea Coletti shows her support for the reopening of California at a protest held at the Ventura County Government Center on Friday, May 1, in Ventura, Calif. Community members gathered in patriotic clothing with signs and flags to help convey their message. Photo credit: Morgan Ellis

Hundreds of Ventura County citizens gathered Friday, May 1, at a ‘Reopen California’ rally in front of the Ventura County Government Center to protest against the stay at home orders in California, in response to COVID-19.

Organized by We Have Rights, the protest was one of half a dozen to fully open the state of California. Protesters across California urgently want to have the ability to go back to work and get everyone’s lives back on track.

With flyers reminding attendees ‘The World is Watching – Make it Count,’ protesters from across the County came outfitted in patriotic colors, cheering and carrying signs or flags.

Although promotional material requested that participants follow CDC guidelines for social distancing, many citizens could be seen disregarding the rules and not wearing face coverings. However, many protesters participated by driving past in their vehicles, similar to the Drive to Open Ventura County protest on April 24.

Several speakers controlled the flow of the protest including Pastor Rob McCoy from Newbury Park who spoke about Churches being an essential freedom, and Don Ziegler, a representative from Citizens for a Free Ventura County.

A large amount of citizens primary complaint was that the COVID-19 predictions from the Ventura County Health official, Dr. Robert Levin, upon which the shutdown was based, were far larger numbers than in reality.

The crowd gathered around as Ziegler spoke on the southernmost corner of the Ventura County Government Center, in front of the flagpole. With a megaphone and speakers, Ziegler spoke to the crowd.

“We take (Levin) on his number one prediction on which this (lockdown) was all made. Which was that we would be much like New York City. That we would have 4-600 hospitalizations a day,” Ziegler explained through a megaphone, standing in front of the crowd. “We have 50 days later just now passed 100 hospitalizations total. Now I don’t have a fancy medical degree, but I could have told you Ventura County was not going to be anything like New York City.”

Ziegler went on to lead a question-answer chant in which he went down a variety of questions to further explain the motives of the citizens participating in the march.

Citizens agreed they were not anti-science, pro-death or in favor of doing absolutely nothing. They also answered that they were all for common sense but it was a bad idea to use law enforcement resources to close the beaches.

When the crowd was asked by Ziegler if they believed it was a hoax, a majority of the surrounding people shouted out yes.

The protest lasted for two hours, and although some attendees had varying ideas on why the lockdown was catastrophic, the general consensus was the same. Attendees believed that Americans have rights, including a right to work and a right to freely participate in society.

Ventura County resident Charles Proefroch expressed diligence in following guidelines, but impatience with the length of the lockdown.

“We believe that it infringes upon our rights to shut everything down,” Proefroch explained. “For people that are still working, it’s easy for them to want the shutdown but man, people have the right to feed their families.”

According to CNBC, California had 328,042 unemployment claims for the week ending on April 25. Previously, California held the title of most unemployed claims. Florida has currently overtaken that title.

Westlake Village resident Patrick Schruben attended the rally with his wife, beauty salon owner Andrea Schruben, who has since had to close her nonessential business.

“We need to open up California. The economy is dying and it’s hurting all over the place,” Patrick Schruben explained. “It’s going to take a long time to recover and we don’t really know what the truth is … Sometimes we hear rumors (California) isn’t going to open until summer and we can’t survive that.”

Andrea Schruben questioned if the lockdown was really best for all citizens.

“How do we make this better for everyone? Closing down the state may have been a good start but I’m not sure it’s still the right one,” Schruben explained.

The current Stay at Home Order insists on citizens staying home and nonessential businesses to remain closed. It is effective until May 15 but is subject to change if Levin and the county believe need be.

As of May 6, there have been 18 new cases of individuals with COVID-19 in Ventura County, for a total of 595 cases according to VC Emergency. It is unclear whether or not these citizens were in attendance at the protest.