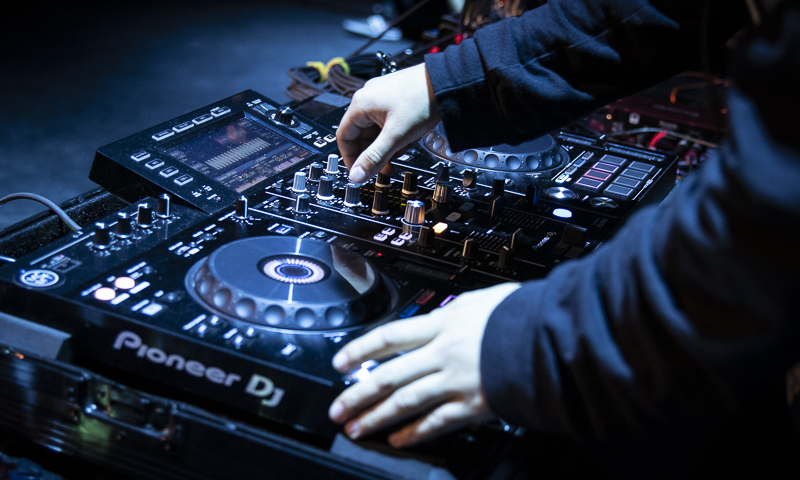 Andy Soto, also known as Dreamix, manipulates the mixing equipment during his set of the previous Student DJ Showcase, held in the Black Box Theater on Friday, Jan. 31, 2020. Performers used a mixture of school and personal equipment during the show. Photo credit: Evan Reinhardt

On April 30, the Moorpark College Music Technology Program returned, hosting its first online concert titled “Stream Jam.” The live stream showed off what students had been working on by using the streaming site Twitch. The show featured 13 unique DJ’s including the professor of the Music Technology program, Nathan Bowen.

Due to the COVID-19 pandemic, the Music Technology program decided to do their first online stream on Twitch, but it involved convincing other DJ’s to perform for the event. Bowen elaborated on the event’s scheduling obstacles.

“It was really tricky to find a way to generate momentum. Fewer students were responsive to the idea, but those who committed were all in. I’d say that was the biggest hurdle,” Bowen stated.

Preston Teel, also known as DJ Alias, one of the performers, hosted the stream on his Twitch channel and provided commentary in between performances. Teel played a major part in setting up the online Twitch event.

“Setting up the event online worked like clockwork. Definitely takes work to spread the word about the event but luckily everyone can be involved from their house,” Teel emphasized.

The stream started at 7 p.m. and Teel opened up the show with an introduction discussing the upcoming performers. The performances began just a few minutes later with visuals created by Teel to support the music that each DJ had made, as well as the performing DJ’s social media handles located at the bottom of the screen.

Performances lasted around 15 minutes ranging to a finale that lasted over 30 minutes.

The first DJ to go up was Joshua Sedgwick, also known as Quetzecoatl, who performed a hip hop/lo-fi type of music with inter-cut dialogue and raining sound effects. The visuals supported the music with the special effects, and a pixelated background with a person dancing in the background. Both the music, and visuals gave off a relaxing vibe during the performance.

Up next was Dean Kyle, also known as DJ Biby who had his own visuals to go along with his music. Kyle played a silly type of music which provided a comedic vibe to it as the song wasn’t too serious, and the video that was played with the song was fitted to match as well.

Kyle compared the experience of streaming to performing live.

“In a lot of ways, it was easier for me as an individual performer to get my set ready to play, since there aren’t hardware factors to take into account during the actual performance,” Kyle expressed.

Halfway into the performance, Bowen performed his set, which encouraged viewers to get hyped. Bowen played a lo-fi type of beat, while also providing his own visuals.

A camera was located at the bottom right of the screen to display what it looked like for Bowen to play music and perform visuals at the same time. The music gave off an energetic vibe, with a unique beat to it.

The visuals also involved Soto playing music in the background with special effects being played as well by Teel. This performance was very energetic and gave off a fun type of energy with a mix of dubstep, and the meme sound effects in the background.

Up next was Trevor Stolz, also known as DJ Feuerdrache who had a mix of dubstep and house music with visuals provided by Teel. The music was very uptempo and gave an energy that could provide listeners with something to dance to. Stolz chose to play a partial segment of his performance as it was much longer than the recommended 15 minutes.

The Stream Jam ended with Teel playing a final performance of bass music. Teel gave a live performance in front of the stream and while simultaneously performing the visuals for the beats. The finale performance lasted just over 30 minutes.

The stream peaked at 50 concurrent viewers tuning in to listen to the DJ’s perform.

For some DJ’s, this online event was easier and a lot faster to set up compared to a performance held outside of their homes.

Stolz commented on what it was like to perform from the convenience of his own home.

“It took me around a few hours to set up everything up to the best quality I could pull off,” Stolz said.

The DJ’s that performed had a lot of fun during the online concert, and would definitely like to do more of these.

“We all agreed it was so fun we want to hit the repeat button. We’re not sure yet when the next one will be, but I could see this being a regular occurrence,” Bowen stated.

The archived recording of the “Stream Jam” concert is currently available to view online at DJ Alias’ Twitch channel.