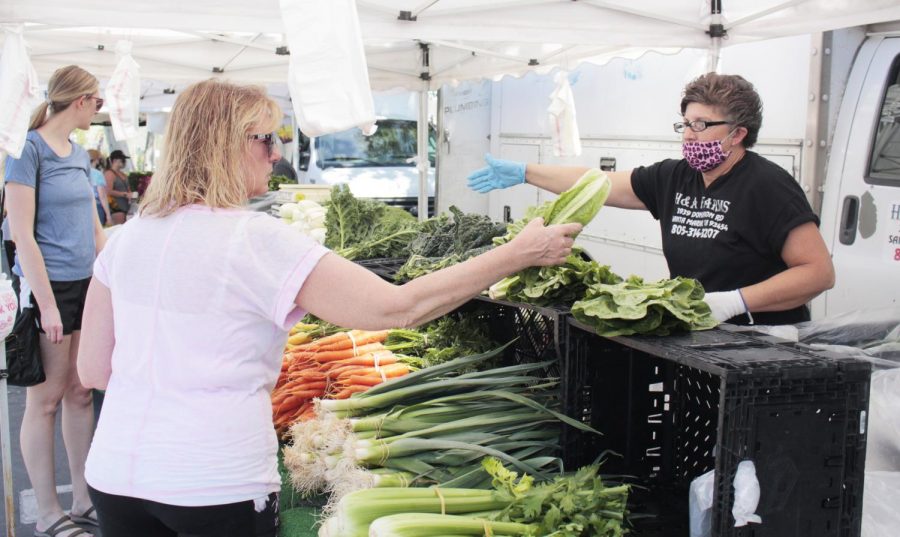 Georgina Bonfert from Simi Valley shops for produce at the Simi Valley Farmers Market on April 24, 2020. After the photo was taken Monce Macias at right, from Santa Maria gave Bonfert gloves to handle the food. Photo credit: Justin Downes

Many businesses remain closed due to the COVID-19 pandemic, but local farmers markets are adapting and continuing to provide fresh produce to the community.

Aleen Ferris manages the Simi Valley Farmers Market on Tapo Street and said their markets are considered essential, though they have had to implement procedural changes.

“We had to come into compliance with the Ventura County guidelines. We have gloves, hand washing soap and social distancing signs. People have been really good about cooperating. This is safer than going to a store, and we have fresh air,” Ferris said.

Farmers markets are only allowed to sell produce, sealed food and other items such as flowers. This means that common place hot foods such as kettle corn and churros, as well as clothing, jewelry and crafts are now missing. Janae Ellmore from Simi Valley visited the Tapo St. market on April 24.

“We came for fruit and get out of the house, but I’m disappointed because this is where I buy my dresses,” Ellmore said.

“Now the parents understand what it’s like when they ground us kids,” Rodriguez said regarding the COVID-19 quarantine. David Amar sells his own hummus, dips, labneh, bread and juices through Brothers Products. Using social media to advertise has allowed his company to keep a steady stream of loyal customers.

“I visit farmer’s markets in Oxnard, Camarillo and Simi Valley, and people are still coming to buy my hummus,” Amar said.

Mario Lopez sells flowers in Simi Valley, Santa Clarita and Santa Barbara and discussed how the business has remained steady for him as well during the shut down.

Simi at the Garden usually holds a free farmers market once a month, donating food to the public free of cost. However, in order to meet recent demand, they are now open every Tuesday at 1 p.m. for people to drive up and receive bags of fruit and vegetables.

Simi at the Garden president Jodie Francoeur said that they nearly called Simi Valley Police on April 28, to help with crowd control because a line of cars was starting to build on Sinaloa Road.

“We’ve seen such an increase of people. Last week we gave away 8,650 pounds of produce,” Francoeur said.

Simi at the Garden partners with Food Forward, a volunteer group that collects fresh, unused produce from Ventura and Los Angeles counties and donates it to local relief agencies. Bill Matzner has been volunteering at Simi at the Garden since 2019.

“The food would have been thrown out otherwise, so we’re able to give it to people without it going to waste,” Matzner explained.

Simi at the Garden is now looking for more volunteers. Dot MacDonald helped to hand out bags of produce.

“I think this is great. There are people who don’t have food right now and they’re able drive up here and get fresh produce for free,” MacDonald said.

Suzannah Underwood said the staff has seen an increase in customers at her family’s Underwood Farms produce markets in Moorpark and Somis despite recent event cancellations.

“Unfortunately, we had to cancel our Springtime Easter Festival, cancel all school tours and birthday parties and close our Animal Center,” Underwood stated.

In the meantime Underwood Farms has started a Healthy Harvest Box program for customers to purchase pre-boxed food that can be picked up in person, or delivered via FedEx. The boxes contain fresh, seasonal produce sourced from Underwood Farms as well as other local vendors.

“Our ‘Pick-Your-Own’ was closed, but will be re-opening soon for customers to pick their own fruits and vegetables,” Underwood said.

For more information on where to visit local farmer’s markets and recent restrictions visit the Ventura County Farmer’s Markets here.