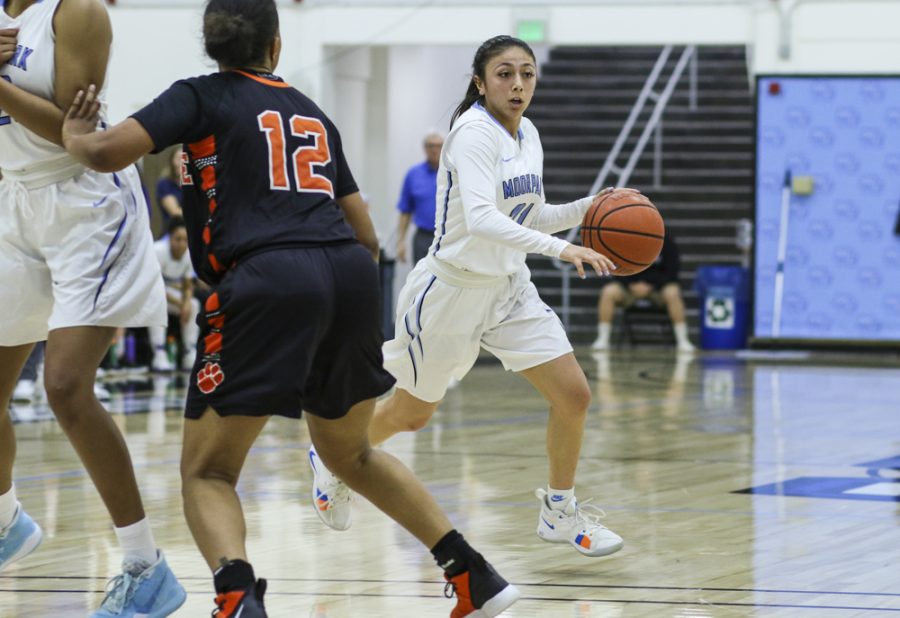 Sophomore guard Jazzy Carrasco comes off a screen during their home game against Riverside City College on Saturday, Feb. 29. Carrasco reached a milestone of 1000 career points during the game. Photo credit: Danny Stipanovich

Jazzy Carrasco’s basketball journey will continue after announcing on April 4 that she accepted an offer from Sacramento State University to play Division-I basketball. Moorpark College’s second-leading scorer last season made it official after signing her National Letter of Intent on April 17.

“I learned they had interest in me the week before our first playoff game. I had a good feeling about the school and was very excited when they offered me,” Carrasco said.

As Carrasco’s exciting journey continues to the next chapter, a look back at her defining moments highlights that her passion for the game was ever-present.

It did not take long for Carrasco to discover her love for basketball. The journey started at five years old when Carrasco joined her first co-ed team playing on the El Rio Kings.

Basketball was always present in Carrasco’s life, often joining her father and siblings in shooting hoops in the backyard, which inspired her passion for the game of basketball at an early age.

After joining the 805 Club Basketball Program in 7th grade, Carrasco realized that she had the potential to be a great basketball player. Carrasco became more serious about having a career in basketball and decided that she wanted to play in college.

“After my freshman year in high school, I had confidence that I could play with the other girls and hold my own. I played varsity freshman year,” Carrasco said.

Carrasco averaged a solid 12.2 points per game, 3.4 assists, 4.8 rebounds and two steals in her senior year at Ventura High School.

Looking to take her game to the next level, she turned to Moorpark College where she was able to excel as a star guard and led the team to two conference championships in two years.

During Carrasco’s freshman season, she averaged 17 points per game to go along with 4.9 rebounds and 4.4 assists per game, helping lead the Raiders all the way to the State Championship game where they, unfortunately, fell short.

Carrasco followed up her first season averaging 16 points per game to go along with four rebounds and 5.4 assists per game as a sophomore. A thief on the defensive end, Carrasco averaged two steals per game throughout her Moorpark career.

Carrasco formed a star duo with sophomore guard Bree Calhoun. The Raiders were unstoppable this past season, dominating their opponents with their team chemistry on both the offense and defense led by Carrasco. Moorpark lost one game the whole season, finishing 26-1 and 8-0 in conference play on a nineteen game win streak with their last game being their first playoff victory over Riverside (16-13, 7-5) 96-65.

Carrasco did not get the chance to finish out her final season at Moorpark as the COVID-19 pandemic caused the cancellation of the state tournament. The athlete’s memorable Moorpark career ended abruptly with two Western State-North Conference championships, the 2019-2020 Diane Costabile Character of Champions Award, two All-WSC 1st team selections and a 2020 CCCWBCA All-State 1st team selection while tallying over 1,000 career points.

Carrasco described what led to her choice to play at Moorpark College.

“When I met with the coaching staff they told me I had terrible footwork and told me a list of things I needed to work on in order for me to get to the next level,” Carrasco said. “They preached skill development and that is why I chose to go to Moorpark.”

“Jazzy made huge strides in her development at Moorpark College. Offensively she became a big-time threat, not only from the three-point line but also with her passing,” Plummer stated. “Defensively she developed into a player that we could put on the opponent’s best scorer and shut them down. She developed into one of the great two-way players in the state.”

Carrasco credits the Moorpark College coaching staff for a large part in her growth as a player. It took hours of hard work to develop the skills of both a point guard and a shooting guard.

“I was a true point guard. I ran the show, got everyone the ball. Scoring wasn’t really my role. That’s why I wasn’t heavily recruited out of high school. I didn’t learn how to score until I got to Moorpark because they had confidence in me that I didn’t have,” Carrasco shared.

Plummer had only great things to say about Carrasco’s time at Moorpark. The coach saw a player develop into a star and lead the team to two conference championships, a state championship appearance and an unthinkable combined record of 59-3 over her two seasons.

“Jazzy has meant so much to our program over the past two years. Her work ethic, leadership, commitment, and competitive spirit have really left a lasting imprint on the program. She embraced and bought into all the things we stand for at Moorpark College,” Plummer said.

As Plummer mentioned, Carrasco was not only a talented ballplayer but a great teammate as well. Sophomore forward Britt Van Buren described what it was like playing with Carrasco this last season.

“Jazz as a teammate is definitely a rare find. She’s a great leader with how vocal she is, a great competitor and was always pushing her teammates to get better every practice, every drill,” Van Buren expressed.

“Jazz and I go way back to playing travel ball together since early high school. She’s selfless and passes first, but she’ll hit a three if a defender is being disrespectful,” Van Buren said. “Jazz has always been fun to play with because of the love she has for the game.”

Carrasco’s strong college career will continue with her next opportunity at Sacramento State. Both her passion and skills for the game of basketball will make her ready to face the journey ahead.