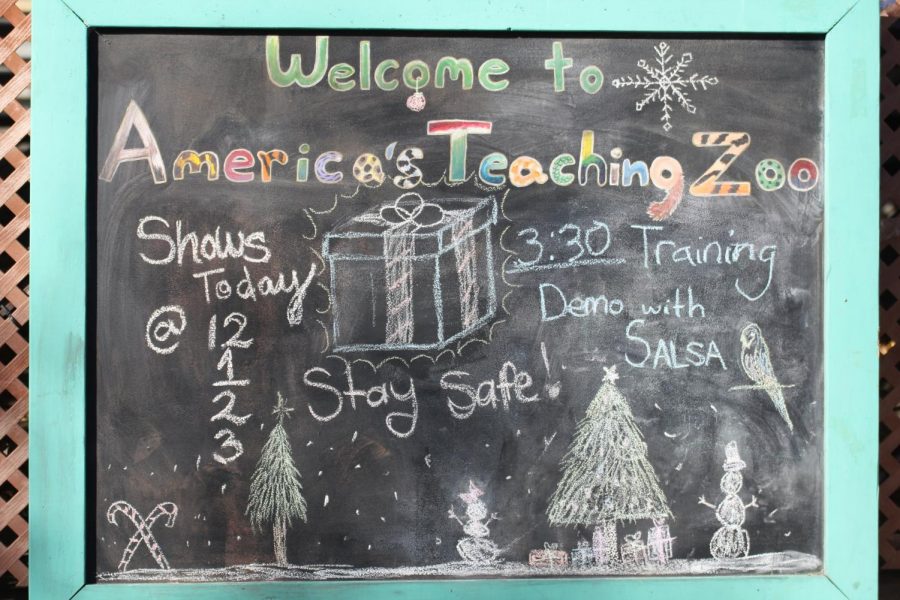 The welcome sign to the America's Teaching Zoo including all the show times and demonstration time. Photo credit: Audrey Lang

The America’s Teaching Zoo at Moorpark College hosted their very first Spirit of the Holidays event. This zoo fundraising event was held in place of the annual Snow Days.

From 11:00 a.m to 5:00 p.m. Saturday Dec. 5 and Sunday Dec. 6, the zoo held their special holiday event to help raise money for fundraising. This fundraising event was presented by the Exotic Animal Training and Management (EATM) students including first year student, Alanah Cole.

According to Cole, “We were supposed to have snow, but since COVID we are not having it this year. It is usually called Snow Days, but this year it is the Spirit of the Holidays at America’s Teaching Zoo, so we are promoting our fundraiser with our colors.”

As COVID-19 regulations did not allow for the zoo to have snow and their annual Snow Days event, they decided to host their fundraising event, the Spirit of America’s Teaching Zoo, virtually. This online fundraiser split the EATM students into five different colored teams as they compete over social media to see which team raises the most awareness and money.

Each EATM student, including first year Riley Magidow, promoted their colored team as they encouraged the guests to photograph with their teams’ colored cutouts.

Each team had color coordinated photo opportunity pop ups around the zoo. These photo areas were used to promote each team over social media. The goal was for each colored team to get the most posts and donations by the end of the two weekends.

Along with these photo areas, there were several animal showings and an animal training demonstration at 3:30 p.m. Throughout the day there were many different animal showings around the zoo, not including the allotted shows. The four designated shows were hosted by the EATM students, one including second year Heather Kern.

The shows incorporated all different animal species. One show presented a porcupine named Rupee, roach bugs, a domestic dog named Buzz and an emu named Zuri. There were also many sporadic animal showings around the zoo throughout the entirety of the days. There was even a flying demonstration from the Harris’s Hawk, Jax.

Each student put in work to promote their team’s color as they raised money and awareness for the America’s Teaching Zoo.

“As first years, we worked really hard to get all these decorations up and all the new photo areas put together. It was a lot of fun but a lot of work and we’re really excited to have everyone come see it,” claimed Magidow.