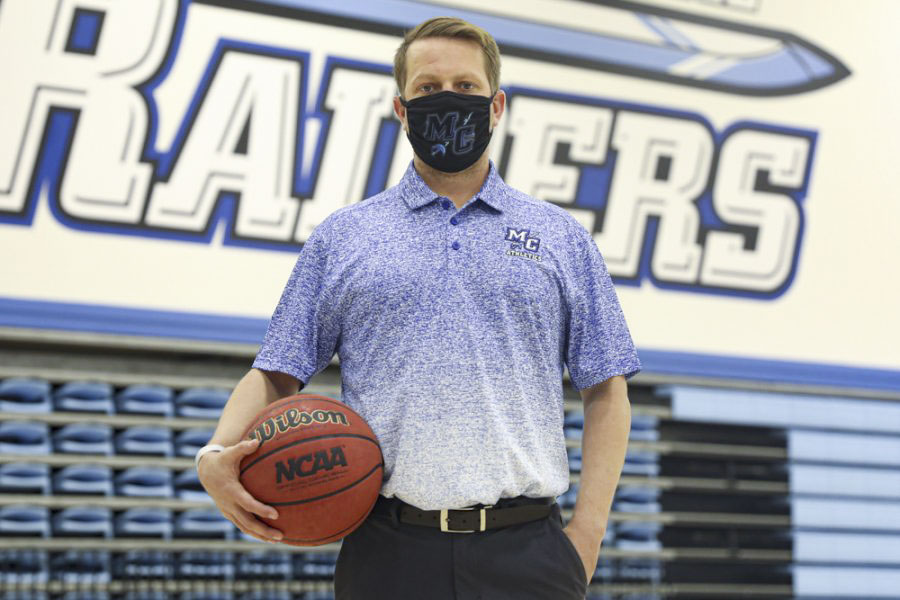 Starting a new job can bring its own set of challenges. A new building, a new culture, a new set of faces and names to learn — a new vending machine that sometimes eats dollars and dispenses Fanta instead of the selected Dr. Pepper.

Now add the pressure of replacing someone who will be fondly remembered for his forty years of service. Now, add a global pandemic into the mix. All these factors would not be the most ideal when starting a new job as Athletic Director, but Matthew (Matt) Crater could not be more ready for the assignment.

“Moorpark (College) is such a great school. The tradition they have had with winning and student success, from the (number) of student-athletes they (recruit), to the type of college it is and the people that are there,” the newly hired Athletic Director explained, “That’s why I took the job.”

Before his new appointment, Crater was an athletic support coordinator, assistant head football coach and kinesiology instructor at the College of the Canyons. During his eight-year tenure, he took his experience from being in the classroom and began to see these kids as students as well as athletes. As a coach, he learned how to recruit and the dedication of working weird hours that sports so often demands.

The most important thing Crater learned was as Student-Athlete Support Coordinator, where he would get his student-athletes the resources they needed.

Crater by no means claims to be an expert but he believes that he can combine all of his knowledge and experience from this time and apply it seamlessly to his new job.

That doesn’t mean there won’t be a few speed bumps along the way. With the pandemic still raging on, the uncertainty of what’s to come is a major obstacle.

On Dec. 17, The Ventura College Community College District announced that all fall and winter sports would not be played during the first half of the spring semester. Reasons for the cancellation were due to the “health and safety of student-athletes and employees.” Crater recognized the difficulty in the district’s decision.

“It’s not fun for our student-athletes. But, when you look at the big picture and you look at the impact (COVID-19) had on the community… I agree with the decision. It was a tough decision and I feel for Vance being in the room when he had to say to all of his coaches ‘we’re not gonna go.’ That’s a really hard thing to do. It was the right decision and I don’t know if there was any other decision that could have been made.”

“If it looks like we can continue (the season) safely, then let’s give our student-athletes the opportunity to play and showcase their talents. The hardest part is that our spring sport athletes have lost out on their season last year and now there is a chance they could lose out on it again. That is a tough pill to swallow. We have to give them every opportunity we can to be successful,” Crater expressed.

The new hire was well received by faculty within the athletic department.

“I think the school did an outstanding job with finding not only a guy that knows about sports [but also] knows about the growth of a college,” Mike Stuart, Moorpark College’s head football coach, stated.

Coach Kenny Plummer, head coach for the women’s basketball program, recalled what happened when he heard the news of the new Athletic Director.

“My initial reaction was ‘I need to find out who this guy is’ and when I called around and did some investigating there was nothing but great things said about Matt. Him being a former assistant coach and former athlete that is always a positive,” Plummer explained. “I was very excited when I found out about his resume.”

Crater wants to see Moorpark College succeed. He not only shows it in what he does know but also in what he doesn’t. When he encounters a new challenge that he isn’t sure how to tackle, he looks to other athletic directors like Jimmy Walker from Ventura College and Jonas Crawford from Oxnard College for guidance. A weekly phone call to Moorpark’s previous Athletic Director, Vance Manakas, has been incredibly helpful according to Crater.

“Our administration here at Moorpark, they are on top of it,” Crater confidently proclaimed.

To the student-athletes that attend Moorpark College, Matt Crater had a message for them;

“Compete. Whether you compete in the classroom or in practice don’t be afraid to fail and see what it is like to put yourself out there,” Crater said.