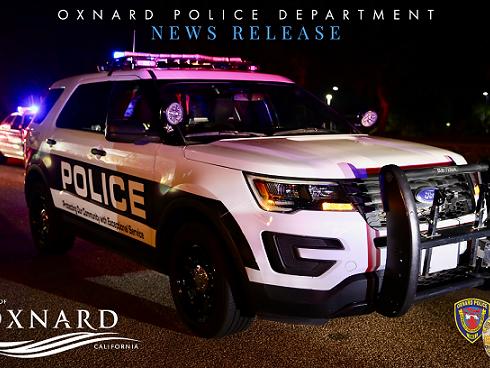 Officers conducted a traffic stop of Santillian’s vehicle at the 2000 Block of East Pleasant Valley Road in Oxnard, then proceeded to confiscate two guns, a little over 90 grams of methamphetamine and a combined total of roughly $1300 in cash from the pair and the vehicle, according to the on-scene supervisor, Sergeant Martin Cook.

“(The suspects’ vehicle) was stopped originally because one of the individuals was identified as having a felony warrant for his arrest,” said Cook. “One was for a violation of the Post Release Offender and then one was an out-of-county warrant.”

A loaded P80 (Glock Style) 9-millimeter semi-automatic handgun with a threaded barrel that can be used to place a suppressor on the tip of the barrel was found, concealed, on Robledo’s person, according to an Oxnard Police Department media release. A loaded Beretta APX 9 millimeter handgun was also found, concealed, in Santillan’s vehicle.

“We made contact with them at the car. Robledo was asked to exit the vehicle and when they were conducting a search for weapons, (officers) located the firearm in his front waistband,” said Cook. “He was placed in handcuffs and the firearm was removed. Then officers asked the driver, Santillan, if there were any other firearms in the vehicle, and he told them that there was a firearm in the center console.”

Both suspects are known criminal street gang members of the Ventura Avenue Gangs within the City of Oxnard and the City of Ventura, according to Cook and the media release.

“Robledo is a Post Release Offender for domestic violence and Santillan is also on probation in the County of Ventura,” according to the media release. “Santillan and Robledo were both found to have felony warrants for their arrest, and are prohibited persons from possessing firearms or ammunition.”

As a member of the Post Release Offender Program for a domestic abuse charge, Robledo was sentenced to what was considered a non-violent, non-serious (irrespective of priors) or non-sex offense and was allowed to serve his sentence in county jail instead of state prison, according to the media release.

According to Ventura County Sheriff’s Office records and Superior Court of California – Ventura County court records, Robledo had pled guilty to these felony charges of inflicting corporal injury on current/former spouse/cohabitant/fiancé on Oct. 11, 2017.

According to Ventura County Sheriff’s Office records, Robledo was booked on the authority of related Post Release Offender Supervision violations; however, this is not the first time this has happened.

Just one week after being arrested on the domestic abuse felony charge, Robledo was arrested again on Oct. 18, 2017, according to a 2017 media release from the Ventura Police Department.

“Robledo had been on court ordered electronic monitoring when he cut off his GPS device during a domestic violence incident in Santa Barbara County,” according to the 2017 media release. “Robledo was transported to the Ventura County Jail where he was booked for being a felon in possession of a loaded firearm, felon in possession of ammunition, felony carrying a weapon in a vehicle, a local warrant, and a parole hold.”

Robledo violated his parole again in 2020, according to a Ventura County Sheriff’s Office 2020 media release. Robledo was granted parole from the California Department of Corrections and Rehabilitation in August of 2020 under the supervision of the Ventura County Probation Agency’s Post Release Offender Supervision (PROS) unit.

“Incident to the arrest, detectives found Peter Robledo to be in possession of a loaded and concealed firearm, as well as methamphetamine possessed for sales,” according to the 2020 media release.

Both Stantillan and Robledo are currently being housed at the Ventura County Main Jail.

Anyone with information regarding this case or other criminal activity is urged to contact the Oxnard Police Department by phone at (805) 385-7600 or anonymously contact the Ventura County Crime Stoppers by phone at (800) 222-8477.