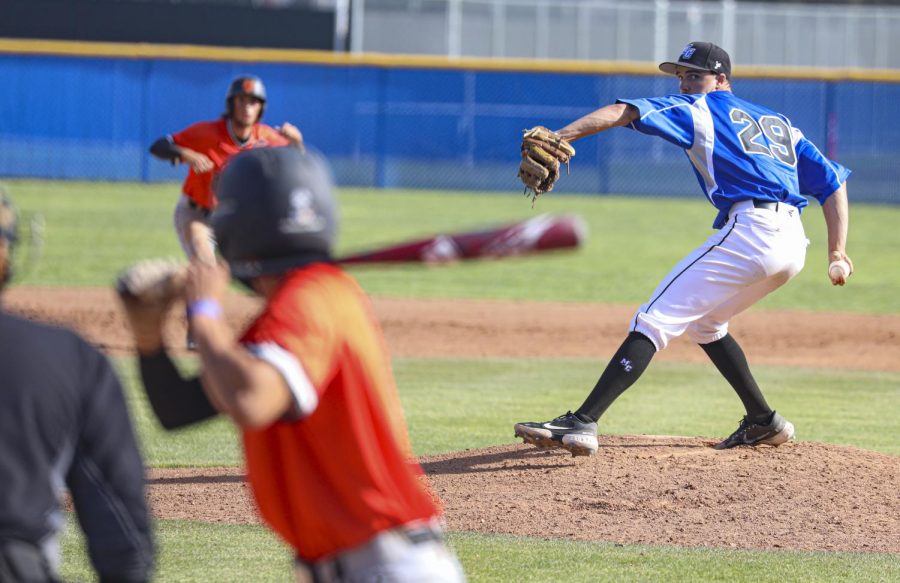 Moorpark pitcher Colin Mitchell winds up a pitch during the second game of the doubleheader at Moorpark College against Ventura College on Thursday, April 15, 2021. Moorpark was defeated by Ventura 10-1, brining them to 3-1 in the season. Photo credit: Ryan Bough

After a 3-2 victory in the earlier game of a doubleheader, the Moorpark Raiders looked to keep their winning streak alive against Ventura College Thursday afternoon.

The Ventura College Pirates came out of the gates hot and got their first run in the second inning and followed that hot startup with four runs in both the third and fourth innings. It was a 9-0 game going into the sixth inning until the Raiders got a run on the board but this was shortly followed by the Pirates who scored another run in the seventh inning.

Pirates starting pitcher Jake Read had a night to remember as he pitched a remarkable five scoreless innings and only allowed four hits and had five strikeouts. After Read’s great performance, the Pirates bullpen came in the game and shut the door on the Raiders.

Luc Polit was the first bullpen arm to relieve Read and only allowed one run in an inning of work. In the final inning, Travis Nelson’s number was called and he finished off the Raiders allowing no runs and striking out two Raiders.

The Raider’s pitching wasn’t as stellar in the second matchup as it was in the first. Starting sophomore pitcher D.J Vergini struggled at times and allowed five earned runs in 2.2 innings of work. Vergini did get the Raiders out of some jams and worked his way out of situations that could have led to many more runs.

Vergini was replaced by many bullpen arms who also struggled to keep the Pirate’s fiery bats cool. The bullpen wasn’t much better as they allowed four earned runs and five hits.

The Moorpark Raider bats were not alive for the second game of the doubleheader as the team struggled to get runners on base and only had a total of five hits in the game. Freshman infielder Albert Prado was the lone Raider to reach home as he scored on a fielder’s choice.

The Ventura Pirates had no problems getting on base and then capitalizing when they reached. The Pirates were living up to the team name as they had eight steals in the game. Moorpark Raider’s first baseman Alex Vega spoke about how the team approaches an aggressive team on the base paths.

“As a team, I feel like the only thing we can do at that point is to do a good job at containing the runners as much as we can, and also to trust in our catcher to get those guys out,” Vega said.

Pirates catcher Max Baldaccini had a huge day as he hit an RBI double in the third inning and followed that up with a grand slam deep to left in the fourth inning. Baldaccini finished the day batting 2-4 with five RBI’s and a stolen base. Baldaccini’s homer was also hit deep into the left field fan section where it just so happened that his family was watching the game.

The whole stadium heard his family scream and cheer him on as he rounded those bases triumphantly. It wasn’t just all Baldaccini who did the Pirate’s damage offensively, as five other Pirates had RBI’s that helped their team blow the game open.

From the start of the game, the Pirates came out hot and never let up. The Raiders never gave up though as they were rallying and cheering their teammates on in the dugout.

Raider’s freshman outfielder Spencer Perry hit a ball at rocket-like speed to the left field corner which eventually led to him being tagged out at third but this showed just how much fight that the Raiders had even when they were down 10-1 late in the game. Perry ran as fast as he could and slid headfirst into third but was tagged out just before his hand hit the bag. His hustle felt contagious and the rest of the team applauded him for it.

After the game, Perry described the team’s heart and love for one and another.

“We have great chemistry, each one of us and the coaches look forward to coming to the field every day,” said Perry.

After the blowout loss against Ventura, the Raiders currently sit 3-1 and appear to have strong team chemistry and lots of talent that could lead them deep this season. Raiders head coach Mario Porto said, “It’s a fun group of kids this year and a lot of the sophomores are taking the freshman under their wings and this has led to a lot of great connections.”

Porto also spoke about the team’s hot start and attributed it to the defense.

“It’s an old saying; pitching and defense will win you games. We are still going to go out and score runs but I am very happy with our defense so far,” said Porto.

The Raiders will play again on Thursday, April 22 in a road trip doubleheader against Bakersfield College.