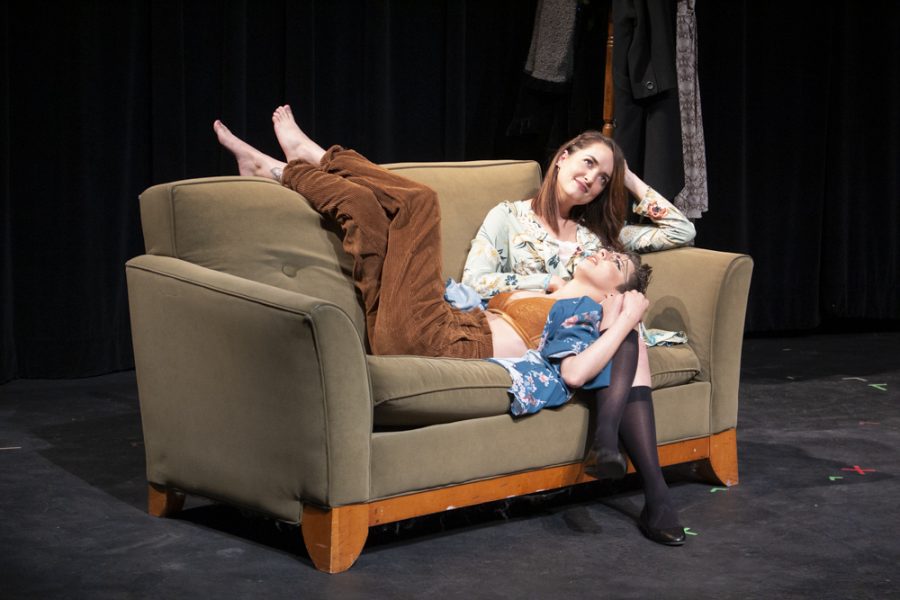 Anne Stevenson, left, and Elizabeth Melcher perform in “To Who I Loved Before” during the “Student One Acts” on Wednesday, Nov. 20, 2019. The One Acts were performed in the Black Box Theatre in the Performing Arts Center. Photo credit: Justin Downes

On April 30 at 8 p.m., the Moorpark College Theatre Arts program will be premiering their spring semester “Student One Acts.” These pre-recorded performances will be broadcasted free to the public via Zoom.

The Theatre Arts students of Moorpark College have written, directed and performed 10 one act plays.

Theatre Arts Instructor, Suzanne Fagan, produced the one acts and out of over 50 submissions, Fagan chose the top 10 one acts.

Fagan exclaimed, “I feel as though it’s because a lot of students are excited about trying to tell a story through different mediums, with the fact that we are all in a pandemic.”

Each of the 10 acts vary in story telling and differ in creative mediums; theatre, film and podcast. As all the rehearsals, meetings and performances were done virtually, the students have uncovered new creative ways to tell their stories through the struggles of acting during the pandemic.

“There are two monologues; a lot of them are turning their pieces into a podcast or a film. It’s going to be a wide array of different ways of telling these stories,” said Fagan.

Two of the “Student One Acts” were written and produced by Moorpark College students who are at the Ventura Youth Correctional Facility.

Fagan explained, “The Theatre Arts department, for about two years now, has been teaching classes at the detention center, the Ventura Youth Correctional Facility, helping those students earn certificates and proficiency awards and degrees.”

For the first time, the Moorpark College Theatre Arts program has teamed up with the Ventura Youth Correctional Facility, allowing for some of the students to participate in the “Student One Acts.”

For the Zoom link or more information about the spring “Student One Acts” visit the Moorpark College Theatre Arts website page.