From the red rocks of Utah to the sunny beaches of California, one baseball player has come to Moorpark to chase his dream 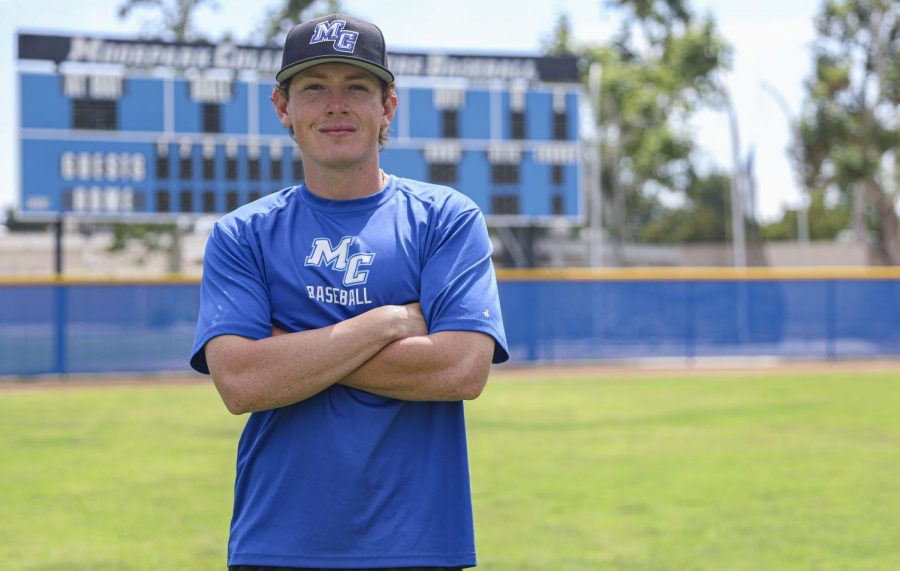 Lance Kinross poses for a photo on the Moorpark College baseball field after practice on May 28, 2021 in Moorpark, CA. Photo credit: Ryan Bough

Sophomore pitcher Lance Kinross has moved 400 miles from home to chase his dreams of one day playing for a Division-I baseball program.

Kinross is a product of St. George, Utah where he is the youngest of 7 kids. Kinross took a big step by moving out to California by himself to try and make his dream a reality. Kinross also credits being the youngest of the family to why he is so competitive.

“I am the youngest of 7 brothers and sisters so I grew up in a competitive household which I believe created my competitive nature,” explained Kinross.

Moving to a new state by yourself at the age of 18 is not an easy thing. Having to move to a new state and create bonds with 20 plus other guys in a clubhouse is even more challenging. Kinross knew this wouldn’t be easy but has now made lifelong friends and memories with his fellow Raider teammates.

“It was definitely a huge jump coming from high school and moving away from everything I’ve known but it was an easy transition for me, the guys were all super accepting and have become some of my best friends that I have to this day,” said Kinross.

“Lance is a super likable guy from the very first interaction that you have with him. I knew he was a good guy from the first time that I met him and I think that the rest of the guys could agree with that, so it all just happened naturally,” said Vega. “With a guy like Lance, it almost feels like you have known him for many years although it has only been a year. Also, he has a positive and proactive attitude about everything so he had no problem adjusting to a new place.”

Kinross first heard about Moorpark College from a coach back in his hometown of St. George. The coach from his hometown is now associated with the Baltimore Orioles and is close with the Moorpark Raiders pitching coach Tom Vasella.

Kinross chose Moorpark as he loved the coaching staff and how they communicated with their players. He also believes it gives him the best opportunity to play collegiate baseball at higher levels in the future.

Kinross is currently a sophomore and would ideally like to transfer this fall. He does not have his eye set on one school completely and is looking for whatever school is the best fit for him. Kinross had high hopes for the season as he wants to be the best teammate possible and have that translate to wins as he believes team chemistry is extremely vital towards team success.

Kinross looked forward to a strong 2021 season that he hopes it will lead him to a bright future with lots of offers to Division-I programs. The Raiders baseball team ended their 2021 season with a 14-12 record.

Kinross has all the ability to take his game to the next level as he has three lethal pitches in his arsenal that keep hitters on their toes. Kinross’s arsenal includes a fastball that he can paint the corners with, a curveball that will often make hitters look silly and lastly a changeup that Kinross believes to be his go-to strikeout pitch.

Raiders catcher Trent Packard is a big fan of Kinross and spoke highly of his work ethic and the great things he brings to the team. Packard often catches for Kinross and also believes that Kinross best pitch is his nasty change-up that throws hitters off with their timing.

“I would say Lance’s best pitch is his changeup. He can throw it when he needs to, and his best pitching trait is his confidence. He thrives under pressure and that’s why he is up there. When he steps on the mound, he is ready to compete,” said Packard.