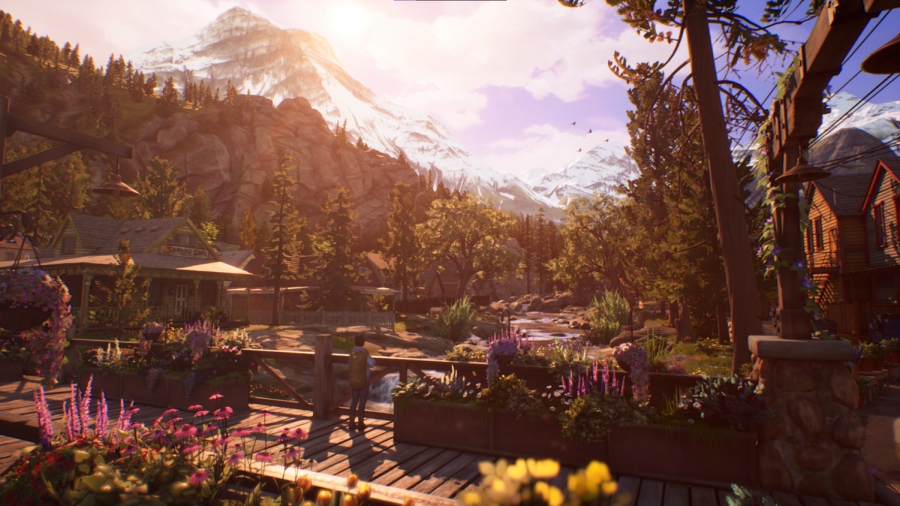 The third video game in the episodic series by Square Enix, Life is Strange True Colors, was released to its fans in early September.

The stories in the third-person graphic adventure revolve around young adults trying to navigate not only political and emotional issues; but supernatural ones as well. The Life is Strange series started back in 2015 with protagonist Max Caufield rewinding time at Blackwell Academy, and now returns again with a whole new set of characters.

Protagonist Alex Chen moves to Haven Springs, Colorado, to reunite with her estranged brother Gabe. After he unexpectedly passes away, she begins to navigate around the town and its people who loved him so dearly. Alex can use the power of empathy to feel and see other people’s emotions; a faint colorful aura indicating whether negative or positive feelings. She views this as a burden, but will use it as an advantage for her to have a better understanding of those around her.

Players take Alex throughout the town to find clues as to what Gabe’s life was like. Attention to detail is imperative, as certain objects act as cues to navigate forward in the plot. The game is far more dependent on cutscenes than in older games, making it almost seem like a short interactive film. There is a lot of emphasis put on the beautiful landscapes and lifelike graphics.

The choices selected by the player decide their fate in-game. There are several different stories to be told depending on what prompt is selected, making it a truly unique experience for each playthrough. Multiple playthroughs are definitely expected and encouraged in order to fully capture the entirety of the game.

Easter eggs from developer’s previous games and pop culture references can be found all throughout Haven Springs. Players can find several Firewalk posters plastered throughout the town; a reference to the Twin Peaks television series, and the top indie rock band in the Life is Strange universe.

The LiS team is also collaborating with other fandoms. Critical Role, an online dungeons and dragons campaign starring prolific voice-over artists, announced through the Life is Strange official Twitter account that their merchandise will be displayed and sold in-game by record store owner Steph Gingrich. Players may recognize Gingrich as the tabletop dungeon master from Life is Strange: Before the Storm.

The game also features an all-original soundtrack by musical group Julia & Angus Stone. While the Life Is Strange series has always featured great indie artists in its soundtrack, this is the first game produced with a soundtrack exclusively written by one artist.

Players will be blown away with the beautiful story writing and dialogue. The writers in LiS often touch on delicate emotional topics; story lines about grieving loved ones, racial tension and gender identity have all been featured in their previous titles. All of those themes have been melded together for the newest title in the expansion. The underlying message of viewing things from other peoples perspective is definitely prominent.

While the game is still captivating, it expects much more emotional bonding to happen in a shorter period of time. While all characters are easy to like, it seems harder to grow close to them as they quickly rush through the plot.

The only technical errors found within the game is a flickering that can occur if the gaming system or graphics card are not fully updated, texturing issues during cutscenes and occasional NPC errors in the town square. These issues will all hopefully be patched up in a future update.

Life Is Strange True Colors is currently available for Xbox, Playstation, Steam and Google Stadia and available for pre-order for Nintendo Switch. While the Life is Strange team is eager for players to jump in, they are suggesting Twitter users to mute the hashtag #SecretsofHaven in order to avoid spoilers. You can find more information and purchase on the game’s official website.