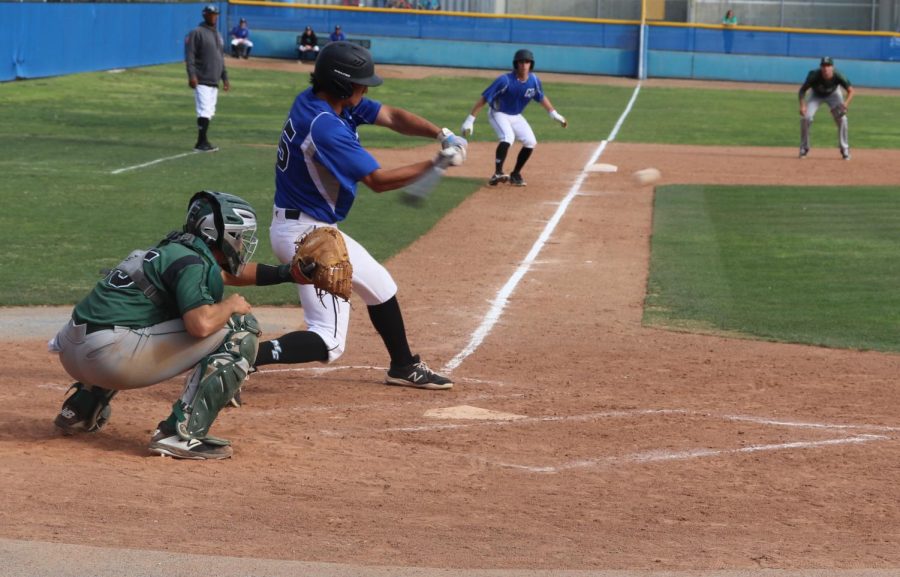 In Swanson’s second inning of work, he struggled to put batters away by walking three straight and allowing one hit. He would exit the game in the second throwing 1 inning allowing two hits, three earned runs, four walks and striking out one.

The next one in line for Moorpark was RHP Jaxon Jordan who came in with the bases loaded. Like Swanson, Jordan struggled by getting behind in the count allowing two walks, while giving up three runs charged to Swanson over a third of an inning of work. Moorpark head coach Mario Porto once again had to go to the bullpen, asking Owen Izzo, a left-handed sidearm pitcher, to stop the bleeding.

Izzo did just that, as he was one of the bright spots of the game for the Raiders. He kept the team within striking distance as the Cougars took a 4-0 lead heading into the bottom of the seventh inning. Cuesta went to their pen following Truer’s exit in the sixth inning. Truer gave everything he had for his team, going six innings, two hits, one strikeout and four walks.

Truer spoke on his pitching performance after the game. “It felt good, you know the body didn’t feel the best, but yeah, that’s going to happen, and you just kind of have to fight through it and find out what works and battle as long as you can and trust the guy’s when you come out.”

Looking to put some runs on the board, the Raider’s bats came alive and took advantage of walks to tie the game 4-4 in the bottom of the 7th. The rally started with a hit by a pitch to Connor Whitcomb, who had a monster day at the plate, having gone 3-for-4 with three hits and three runs. This opened a revolving door of relievers for Cuesta.

Whitcomb spoke on his performance today, “I was honestly trying to get my pitch, you know, trying to stay modest at the plate. Trying to lay off-speed, look fastballs, and luckily throughout the game, I got about probably 90% fastballs, so I hunted them and had some fun.”

In the top of the 8th inning, the Cougars rallied to retake the lead 7-4, scoring three runs charged to Izzo. Cuesta infielder Ryan Fenn would come up with a clutch double to put the cougars in front by two. Fenn would also cross the plate extending the lead to 3 on a passed ball.

Izzo finished his outing with six innings pitched while allowing four earned runs along with four walks and three strikeouts. He would be relieved by RHP Andrew Tarazon, the fourth and final Raider pitcher of the game. Tarazon would finish the game for the Raiders, pitching an inning and a third.

Following the game’s conclusion, Izzo shared his thoughts on his performance, “I felt pretty good going in with the bases loaded. I was just working on ground balls, and that was probably my best inning cause I felt most confident in the position, so probably my first inning, yeah.”

In the bottom of the 8th inning, the Raiders would take advantage of walks once again. Moorpark shortstop Shane Leong-Grieger who went 1-for-4 with 2 RBI, drew a walk with the bases loaded to cut the deficit down to two runs.

Unfortunately, the Raiders could not take advantage of the bases loaded to scratch across more runs in the inning. Tarazon would once again take the mound in the ninth and would shut down Cuesta with ease.

Going into the bottom of the ninth inning, the Raiders were down by two runs and would score one more run on a drop third strike with a throwing error by Cuesta catcher Dalton Cram. Unfortunately, that would be all the scoring the Raiders could muster as they fell to the cougars 7-6, bringing Moorpark’s season record to seven wins and 13 losses.

After the game, Head Coach Porto discussed the game and how his team played.

“It was the first four innings,” said Porto. “When we didn’t throw strikes, you can’t walk nine guys and expect to win, so you know that’s what hurt us most. You know they got the three in that one inning, and you know when you walk guys, you don’t give yourself a defensive chance to play defense that’s going to happen.